Australian Open 2014: Ana Ivanovic comes from a set down to defeat Sam Stosur and reach the fourth round 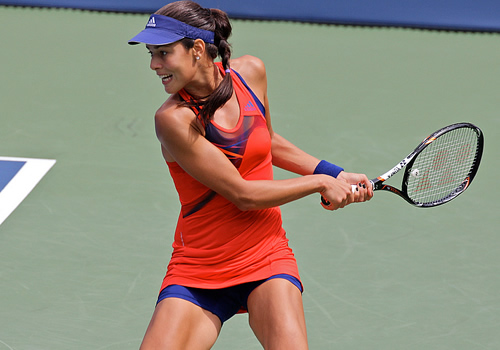 Ana Ivanovic is through to the last 16 in Melbourne Photo: Marianne Bevis

The home nation had watched its two rising male stars, teenagers Nick Kyrgios and Thanasi Kokkinakis, follow their senior colleagues out of the Australian Open on a hot and steamy Thursday. That left just two Aussies for the green-and-gold faithful in cheer in the singles draws.

After two years without an Australian woman in the third round, suddenly they had two. What’s more finally—finally—the weather in Melbourne seemed to turn on the charm. By mid afternoon on Day 5, the temperature tumbled from 42C to 32C, and by the time every Aussie’s favourite player, Sam Stosur, took to the Rod Laver arena, it had become a near-perfect 30.

Before that, though, her compatriot Casey Dellacqua, only a year younger than Stosur at 28 and playing in her 11th Australian Open, was trying to match her best-ever home run by reaching the fourth round.

It feels pretty good, I didn’t know if I’d ever be back in the fourth round of the Australian Open or any Grand Slam

Like Stosur, she had found success hard to come by in singles at her home tournament, her best result coming in 2008 with a fourth-round run. In doubles she reached the final last year—as she did at Wimbledon and the US Open as well—but her resume told of years littered with shoulder and foot injury.

This year, and set to rise back into the top 100, Dellacqua had already beaten former world No2 and two-time Australian semi-finalist, Vera Zvonareva, in the first round, followed by 18th seed Kirsten Flipkens on the hottest day of the tournament so far.

Apparently thriving in the baking conditions, she stormed through her next opponent, Jie Zheng, 6-2, 6-4, again in the sultry afternoon heat.

The left-hander has the potential, and the variety of shots, to cause her next opponent, Canadian teenager Eugenie Bouchard, some problems, but for the moment, she is clearly relishing this Melbourne journey: “It feels pretty good, I didn’t know if I’d ever be back in the fourth round of the Australian Open or any Grand Slam… Now I’m back in the fourth round and it feels awesome!

But would she have Aussie company come Sunday, or would she be the lone carrier of the home flag?

Stosur turns 30 in a couple of months’ time, and she too rose to prominence in doubles—titles in the US and French doubles, runner-up in Australia and Wimbledon—before making her breakthrough in singles at the French Open in 2010. The next year, it took her just 73 minutes to beat Williams for the US title, yet her home title seemed always to elude her.

Burdened by the hopes and expectations or her home fans, she twice reached the fourth round in 11 attempts. This year, though, she looked leaner, fitter and more confident than in many a year, buoyed up by a new coach and multiple titles last year for the first time in her career.

Her opener was against Klara Zakopalova, the 32-ranked woman who beat Stosur in the Hobart semis a week ago. This time, Stosur advanced, 6-3, 6-4, only to face Tsvetana Pironkova, who came through qualifying to win Sydney. This time, Stosur dropped only two games.

Unfortunately, the draw continued to be tough. As well as another Grand Slam champion in the third round—Ana Ivanovic won the French Open in 2008 to reach No1, and was a finalist in Australia the same year—Stosur would then face Serena Williams.

Ivanovic remained something of an enigma since she burst on the scene at barely 20, seeming to struggle with the fame and fortune that followed her success. Since that heady year, her best Grand Slam result had been a quarter-final finish at the US Open in 2012.

There were signs, though, that the Serb had turned a corner, as she arrived in Melbourne with her first title in more than two years in Auckland. She said of her new Serbian coaching team: “They’re very positive, and that’s something I was lacking in the past. I really feel I broke out of that little negative spell. I just feel happy competing.”

She looked it, too, making easy progress to this showpiece match in front of a supportive crowd. With some family in Australia, Ivanovic has lived here herself—and she got plenty of support.

Both women began in lively fashion, keen to take control. Ivanovic was first to earn a break point in the fourth game with a magnificent angled forehand drop shot, but Stosur saved it with her first ace, and gradually got into her rhythm. With a combination of big kicking serve, a few pitch-perfect lobs, and great forehand striking, she forced a break in the seventh game and backed it up with an impressive love hold. She then pounded onto the Ivanovic serve to earn a break point for the set.

It was a knife-edge moment, as an Ivanovic second serve was called out, only to be challenged and shown in. Stosur, who had already gone to her chair, could only smile at the heavens and return to the baseline.

It happened again, this time Ivanovic giving a wry smile, but she survived to make an important hold.

Yet again, line calls disrupted the flow, and again Ivanovic challenged correctly. Stosur ended up serving through four deuces and four set points, but each time Ivanovic stepped in to pummel a winner. It paid off: The Serb broke to level, 5-5.

But in this weather-beaten first week at Melbourne, the skies would again disrupt what had become a gripping tie-break. Stosur had pulled back from 3-6 down, facing off three set points, and stood at set point herself when the rain began to pour down.

When they returned under the roof, half an hour later, Stosur went on to seal the set, 10-8. Immediately, though, Ivanovic went back on the offensive, and although she failed to convert three break points in the opening game, she took her next chance in the fifth. A love hold and she led 4-2, serving out the set 6-4.

The opening point of the decider saw Stosur suffer another poor line call—a winner that became a loser when they replayed the point. Tension now seemed to grip Stosur, and Ivanovic struck quickly with three forehand winners to break to love, and completed a run of eight points with a love hold.

Ivanovic saved Stosur’s only break point in the set with a killer lob to consolidate a 4-2 lead and she broke again to win the match, 6-2.

She had played some terrific tennis, though she afterwards reckoned she would have to play twice as well to beat Williams.

So Dellacqua will indeed be the lone Aussie standard-bearer in Round 4, and the only unseeded woman in her half. Flavia Pennetta beat Mona Barthel to next meet Angelique Kerber. Na Li survived a tough three-set challenge from Lucie Safarova to set up a fourth-round meeting with Ekaterina Makarova.

Meanwhile, Williams continued her serene progress past Daniela Hantuchova to take Margaret Court’s record of Australian Open match-wins, 61 of them. She has, in three matches, lost just 12 games.