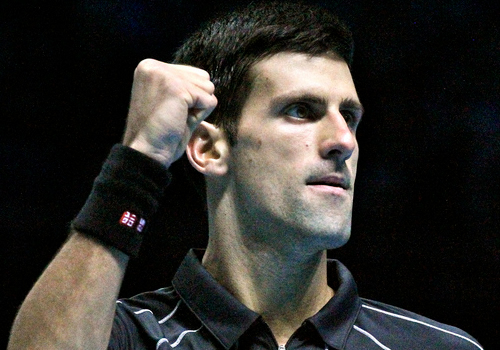 So the stage is ready once again to set tennis hearts aflutter as the first Grand Slam of the season, the extrovert, sun-drenched, self-dubbed ‘happy Slam’ launches another year of sweat and toil for some of the biggest names in sport.

And they don’t come much bigger than Rafael Nadal and Novak Djokovic, as their winnings of last year prove: both well in excess of $50 million—and that’s without their even bigger off-court earnings.

This most glamorous yet gladiatorial of sports melds movement, strength, endurance, intelligence and passion into a kind of balletic chess that has no time limit, no ‘last hole’, just a battle to the final point.

And no match demonstrated better that fight-to-the-death quality, especially in its pure five-set, no-final-tie-break form, than the last match at this very Grand Slam two years ago between those same stars, Nadal and Djokovic. It lasted almost six hours and left both men needing chairs for the award ceremony.

Back then, they were ranked Nos 1 and 2—with defending champion Djokovic the top dog—but last year, Nadal was missing with injury, as he had been for almost eight months.

Some wondered if he could hit such heights again, especially on the unforgiving hard courts. Yet here we are, in 2014, with defending champion Djokovic playing second seed to world No1 Nadal, who last year went unbeaten on hard courts from February to October, winning all three North American Masters that he entered as well as the US Open—four out of a remarkable 10 titles.

The stage, then, is set for these two, who each has more than twice as many points as the third man in the rankings, to converge for a 10th time since that 2012 Melbourne final.

Nadal is attempting to become the first man in the Open Era, and only the third in history, to win two career Grand Slams by winning each of the four Majors twice.

For his part, Djokovic is aiming to become just the second man to win four consecutive Australian Opens and only the second in history to win a total of five or more—though Roger Federer could achieve the same distinction.

And there are, as always, many other players with records of their own in sight. Back to four-time Melbourne champion Federer: The No6 seed is level with his new coach, Stefan Edberg, for the most Australian final appearances. Another final and he would top the list with six.

Should Federer win his 18th Major, he would tie Chris Evert and Martina Navratilova in fourth place on the list of most Grand Slam singles titles.
Should he do so, he would be only the fifth man over 30 in the Open era to win two Slams. Already, though, Melbourne notches up the longest Open-era streak of Grand Slam singles appearances: 57.

However, it is Lleyton Hewitt who equals the Fabrice Santoro’s record for most Melbourne appearances, 18 of them.

And to add still more sparkle to the proceedings, Melbourne will welcome back three great former champions—as coaches. Ivan Lendl, coach to Andy Murray, is joined for the first time by Boris Becker in Djokovic’s camp and Edberg in Federer’s, all of them on the top-10 list for Grand Slam match-wins.

What, then, are the prospects that any of these champions will hit their targets? The odds, without question, will be in Djokovic’s favour, for if even coach Becker concedes—as he did at the draw ceremony—that his man’s half is the easier one, there is cause for concern for the rest.

Of six Grand Slam champions in the draw, five of them are in the top half: Nadal, Federer, Murray, Hewitt and Juan Martin del Potro. Defending champion Djokovic will not take any of his opponents for granted, but he must have found it tough to suppress just a small smile.

Nadal can only gain points in Melbourne this year, so there is no danger to his ranking, but what wouldn’t he give for that double career Grand Slam?

He certainly proved his credentials on hard courts last season, and has already won his first pre-Australian Open title in Doha. But his quarter—just like the other in his half—is a tough one. Even the opener is challenging, offering up the young and dangerous home-grown Bernard Tomic, though the popular Nadal won’t want for support in the Rod Laver arena. Tomic, still an under-achiever, has turned on the form often enough—such as against Richard Gasquet at Wimbledon—to make Nadal wary, and arrives in Melbourne with a final finish in Sydney.

The top seed’s next big challenge should come from one of the most dangerous unseeded men in the draw, Gael Monfils, who took Nadal to three sets in the Doha final. The explosive Frenchman has been as high as No7, but injury and inconsistency have brought many fluctuations.

Round 4, too, could be fascinating, especially if the 32-year-old Hewitt continues the form that beat Federer in Brisbane last week. He certainly has the beating of Andreas Seppi, but there is some real talent in this segment, not least Kei Nishikori, who scored a useful win over Tomas Berdych in the Kooyong Classic final this weekend, and another Australian, Marinko Matosevic.

Nadal should survive to the quarters, though, where he may face fellow Grand Slammer del Potro, though the big Argentine has to tackle one of the young players tipped for the top this year in either Grigor Dimitrov or Milos Raonic, who are drawn to meet in the third round.

All making this one of the hardest line-ups to call, but del Potro’s improving form last season, and his run to the title in Sydney this week, suggest he is very close to his US Open-winning best.

Australia has been a happy hunting ground for Murray, twice a winner in Brisbane and with runner-up trophies at the Australian Open in three of the last four years. But fresh back to the tour after back surgery in September, he is short on competitive matches.

He played twice in Abu Dhabi—a win and a loss—and fell in the second round in Doha. He therefore opted into the Kooyong Classic, where he got some useful court time in his two-tie-break loss to Hewitt.

Murray does at least have some easy openers in Melbourne, the first test coming in Round 3 against No26 seed, Feliciano Lopez. Round 4 will bring either John Isner or Philipp Kohlschreiber, who had a titanic battle this week in Auckland that went to Isner in three tie-breaks. The good news for Murray is that Isner, who went on to win the title with two more tie-breaks, may be leg-weary by a fourth-round match.

So this is not a bad draw for Murray, cranking up steadily towards the quarters. There, though, he will find the toughened survivor of one of the most competitive eighths in the draw.

The stand-out is Federer against Tsonga in the fourth round, a reprise of their quarter-final last year that went to five gripping sets. Federer then played Murray in the semis, another five-setter—though the replay would this time come in the quarters.

Federer, here with new coach, new racket and as a newly-expectant father, was patchy in reaching the Brisbane final, though started to look stronger in the latter stages, and produced some showy shot-making in his Melbourne opener, an exhibition against Tsonga on Wednesday.

He also has an interesting trip-wire in the shape of the man who beat him in Round 2 of Wimbledon, Sergiy Stakhovsky, who is a potential third-round opponent.

Federer has said he does not expect to be back at his best until spring, and if Murray is undercooked, it may be Tsonga’s chance for another Australia run, six years after his first and, thus far, only final finish.

Other sleepers who could cause an upset are Marin Cilic and Gilles Simon.

This quarter is particularly interesting in bringing together two men who, at a relatively mature stage in their development, have reached career highs.

Australia has been good to Ferrer in the past, with two semi finishes here, including last year, but after a string of successes in Auckland, he this year failed to reach the final, and fell to the 54-ranked Daniel Brands in Doha last week.

Berdych, too, has enjoyed Australia, reaching the quarters for the last three years, and he reached a career high No5 in 2013. He opened 2014 with a first-round loss in Doha, in two tie-breaks, and scored both a win and a loss to Nishikori in Kooyong this week.

Ferrer’s first seed is the in-form Jeremy Chardy or possibly another man coming into some form, Alexandr Dolgopolov, who took Ferrer to three tough sets in Doha and beat second seed Jerzy Janowicz in Sydney. Janowicz takes on Mikhail Youzhny for a place in the fourth round against Ferrer.

Berdych has some big-hitters in his section, with the third round offering either Ivo Karlovic or Dodig. The fourth round is likely to pose Kevin Anderson or Tommy Haas, whose Indian summer took him back to the top dozen in 2013 after almost six years. One thing seems certain: There will be one big man, Berdych or otherwise, in the quarters who can probably expect to find the ever-ready Ferrer there, too.

It is not just the draw that suggests Djokovic will be the last man standing in his quarter and possibly the man left holding the trophy come the end of the month. He arrived in Australia with just one loss in his last 31 matches—and that in the final of the US Open to Nadal. That run represented four straight titles, including the year-end World Tour Finals, to reach a tally of seven for the year, as well as the final at Wimbledon.

He has not played a tour event ahead of Melbourne, but nevertheless has thrown down the gauntlet in the exho tournaments he played, winning the high-quality Mubadala Championship in Abu Dhabi and his one match at the Kooyong Classic.

The early seeds in his segment should not cause too much trouble, though the first, Dmitry Tursunov, is at his highest ranking in five years and reached the semis in Sydney this week. The fourth round brings either Fabio Fognini or Ernests Gulbis, flamboyant players both who can upset the top players on the right day. Their third round meeting promises to be a treat.

But the most striking match-up lies in the quarters if Stanislas Wawrinka continues his impressive form to reach the quarter-finals. Wawrinka arrives at a career-high No8 and with the Chennai title last week, but the reason for the anticipation goes back to his fourth-round meeting with Djokovic in Melbourne last year, one of the matches of the season decided in a 12-10 fifth set. The two men then repeated the fireworks in the semis of the US Open.

Wawrinka lost both those marathons, and will have to outplay the classy young Pospisil—though the No28 seed failed to complete his two tournaments this year with back problems—plus either Gasquet or Tommy Robredo.

Djokovic may look a shoo-in, but this remains a fascinating quarter for the rest.