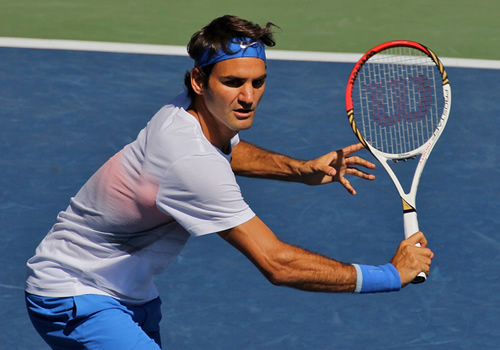 Roger Federer is through to the quarter-finals in Melbourne Photo: Marianne Bevis

It’s probably fair to say that Roger Federer and Jo-Wilfried Tsonga know each other pretty well.

Before the first Grand Slam of 2014 got under way in Australia, the two men had played each other 13 times, five of them Grand Slams, two of them in Melbourne.

But over the years, they also began to join forces away from the point-winning treadmill of the main tour. At the end of 2012, they travelled through South America, taking tennis to new audiences and clearly having a ball in the process. And this year, it was Tsonga who Federer invited to play his huge fund-raiser in Melbourne Park in support of his Foundation.

It’s probably fair to say, indeed, that they are not just rivals but also friends. Tsonga, talking about their South America tour said simply: “It’s good to win money and live and do some stuff, but it was also important for me because it was with Roger, so for me it will be very good memories.”

There is, too, another compelling ingredient in this friend-and-foe relationship. When they meet on a tennis court, whether playing for points, prizes or charitable donations, one thing is clear. They bring out the best in each other: two stylish, all-court, flair players who both like to attack, to tease, to slice and dice—when they are not making forehand winners, that is.

When the draw was made in Melbourne this year, then, the potential replay of their memorable 2013 five-set quarter-final became one of the two most anticipated matches in the tournament.

In each of their five previous Grand Slam matches, however, they had met at the quarter or semi-final stage. Now, with Federer ranked outside the top four, they were for the first time thrown together at the fourth-round stage. Which meant that, for the winner, this was just the beginning of a draw from hell that lined up Andy Murray, Rafael Nadal and Novak Djokovic.

As Federer commented after his third-round win: “This is clearly a tough draw I have. Important for me now is that I don’t go crazy about who I play.”

That can be easier said than done, especially with the bashing that his confidence took through a difficult 2013 of injury, shock losses and a slip in the rankings. And let no-one forget that the charismatic Tsonga is a former top-five player who at various stages had beaten all of the “big four”, including Nadal and Murray on his way to the final of the 2008 Australian Open, where he also took a set off Djokovic.

Since his arrival in Australia, though, Federer has had a certain spring in his step, a new racket in his hand, and Stefan Edberg in his box. He also looked fitter than at any time since back trouble hit him at Indian Wells almost a year ago. With a final finish in Brisbane already under his belt, he had reached this fourth round without dropping a set and in super-quick time.

Tsonga, too, was back from mid-season injury in 2013 with a new team in his box and a leaner, calmer look on court: He too had yet to drop a set.

It was Federer, though, who burst from the blocks after a nervy opening service game. He unleashed a full-blown attack on Tsonga that showcased both his defensive and attacking backhand to full effect. A smash and a forehand winner, and he had a quick break.

The Federer serve was not yet in its groove, enabling Tsonga to take him to deuce, but two extraordinary drop-shot winners in a row got Federer out of trouble for a 3-0 lead.

In the fifth game, Federer won five of the six points at the net, and went on to serve out the set in under half an hour, 6-3. Already the tactics were clear: Federer had won 14 points at the net in just five service games.

But it takes two to tango, and in the second set Tsonga began demanding great defence and the full range of Federer’s shot-making—drops, lobs, serve-and-volley. The Frenchman was painting the lines, clipping the net, throwing in some net-rushes, and it all made for exhibition-style tennis.

Both controlled their service games in a closely contested 45 minutes, though by 5-5, Federer had the edge with only three points dropped on serve. He was also up to a remarkable 26 points off 30 net approaches.

Although the tactics were forcing Tsonga’s hand, the Frenchman hung tough and, as the clock passed the first hour, he perhaps hoped the Federer level must drop.
Not so, at least for the moment: Federer broke, and three winning serves and a perfect lob later, he had served out the set to love, 7-5.

The second-set statistics suggested Tsonga was on a hiding to nothing: Federer had won 24/27 points on serve, 13/14 points at the net, and made 21 winners to five errors. And Tsonga was not played at all badly.

Twitter, at this point, came alive with references to the Wimbledon of 2011 when, famously, Federer led by two sets to love and lost the match to a brilliant Tsonga comeback. This time Federer, despite drifting from his net-attacking tactics, broke to love in the third game.

He looked like doing the same in the fifth, but a fired-up Tsonga lifted his game to hold and was suddenly pumped up. Was this the turn-around? It looked just that when he earned his first break point of the match, but Federer worked an edgy hold. The Swiss then made his only double fault of the match as he stepped up to serve for the match, but it was a false alarm. He took game, set and an impressive win with, appropriately enough, a volley winner.

This was, then, one of Federer’s best performances since this time last year, especially so in showcasing some important improvements: a rigorous and varied backhand; a stack of net plays; a good break point conversion rate of three from seven; and just six points dropped on his first serve.

How much his performance was down to the new racket, an inspiring coach or an intensive off-season training block is impossible to say. What is possible to say is—Federer will be far from a walk-over as he embarks on the toughest draw in tennis.

Next in line is Murray, just as he was last year, when Federer lost a gripping five-setter in their only match of 2013.

The Briton reached his fifth consecutive quarter-final at the Australian Open with a 6-1, 6-2, 6-7, 6-2 defeat of Lucky Loser, Stephane Robert.

Murray hit 48 winners in another match full of net points, and looked as though he would sweep to an easy three-set win when he broke in the third set. But the gutsy Robert broke back, defended two match points, and snatched the tie-break. That galvanised Murray, however, and he made just three more errors in the match.

But what of that other highly anticipated match in the draw? Well, it was the potential replay of last year’s Australian Open fourth-round meeting between Djokovic and Stan Wawrinka, decided 12-10 in the fifth set. And the tournament has been blessed: A replay of that one will be played out—same time, same place—tomorrow.

Australian Open 2014: Sharapova loses to Cibulkova in round four