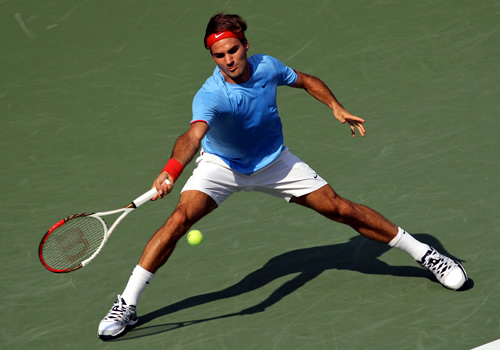 In the end, it all got too much at the 2014 Australian Open. The ‘happy slam’ had been battered by too many unhappy players, headlines and fans.

For while few would deny that these parts are famed for hot weather—and it’s no accident that this is the Slam with an extreme heat policy and two, soon to be three, roofed stadia—the conditions had become big news around the world.

Tuesday brought 43C, Wednesday a mere 41.5, and players, ball kids and fans were buckling under the pressure—much like the tram tracks back to Melbourne city.

Finally the tournament buckled under the pressure, too, when Day 4 promised to be hotter still. By lunchtime, with the temperature already into the 40s and the humidity increasing, play was stopped, not to resume on the uncovered courts until 6pm. Yet still Melbourne was not done, and dramatic forked lighting pierced the glowering skies while thunder bellowed all around. Sure enough, the rains came and everything stopped—except on Rod Laver and Hisense.

Yet even on the Australian Open’s biggest show courts, the schedule was all over the place, though not because of the weather. A gutsy Maria Sharapova battled under open skies for three-and-a-half hours, followed by Caroline Wozniacki for almost two hours under the Rod Laver roof. They both survived, but pushed Rafael Nadal well beyond his scheduled 2pm start to 6pm.

Not that the Aussie fans minded the wait: the much-admired top seed took on one of two talented teenagers to carry the home flag into Round 2, Thanasi Kokkinakis. And the 17-year-old certainly did them proud, delaying Nadal for almost two hours before succumbing to the vastly superior power of his opponent, 6-2, 6-4, 6-2. Ranked 570, and playing his first singles Grand Slam main draw, this was a worthy effort from Kokkinakis .

Even so, Nadal has reached Round 3 having played and won just four sets, and with the temperature still an oppressive 35C as he left the court, he admitted: “Very happy to see the roof out there today…but still very humid.”

The late start on centre court meant the Hisense schedule had overtaken that of its larger sibling. And that meant Roger Federer, not scheduled until 5pm, was on court before Nadal.

The Swiss afterwards revealed, though, that he had not been able to warm up outside: “They didn’t allow me to warm up outside because the officials were gone, everybody was resting. So I had to go indoors. I never actually experienced the heat as such today.”

By the time his turn came, one match had been played in the midday heat, one had begun under the sun and concluded under the roof, and the third was played entirely indoors.

Federer had not played on Hisense in 10 years, but if there is one man who enjoys indoor conditions, it is the Swiss. One sensed, however, that it mattered not the environment: This was a day when little would go amiss.

In fact since Federer arrived in Melbourne, he has looked and sounded a very contented man. Much of that will be down to news of impending fatherhood again. However, a return to 100 percent fitness after a difficult 2013, a solid off-season training block, childhood hero Stefan Edberg in his box, a new racket in his hand—all these must have contributed to the optimistic demeanour. And not being favourite for the title may also have helped—though he will almost certainly have to beat in quick succession the three who are: Andy Murray, Nadal, and Novak Djokovic.

Whatever the factors at play here, when everything comes together, his becomes the most compelling tennis in Melbourne Park.

For two sets, his hapless opponent, the 99-ranked Blaz Kavcic, might as well have been playing on another court. Federer likes the heat and he likes playing indoors, and with both on his side—plus a packed and adoring stadium—he raced to a 6-2, 6-1 lead in 54 minutes. He hit 34 winners to Kavcic’s five, was serving at close 80 percent, and made only 18 errors. The Slovenian did manage one break of serve, but Federer broke six times.

The third set tested the No6 seed more thoroughly, providing a rather more useful guide to the underlying form and confidence of the former champion. Kavcic played at a much higher level, living with Federer through some penetrating baseline rallies and matching him on serve. Both hit five aces, neither offered up a break point, and until the vital mid-point of the concluding tie-break, neither double faulted.

Kavcic made his one serve error when he had a mini-break advantage, and Federer was clinical in his punishment. Having stayed back for much of the set, he came forward to finish at the net, making 10 out of a final tally of 23 points there.

Kavcic bravely raced the baseline, stumbling to retrieve, and ended the match on the ground—and neither man could resist a smile.

More than three hours later, the clock approaching 11pm and the temperature still at 35C, Federer’s next opponent, either No31 seed Fernando Verdasco or Teymuraz Gabashvili, was still hard at it, just beginning the second set.

By the time the winner takes to court opposite Federer on Saturday, it seems more than likely that the schedule will be back on track: The weather is forecast to be turn cooler before the weekend. And it would be a major surprise if Federer were not back on the court where he lifted his first Australian trophy 10 years ago.

Those big numbers do keep coming, just like Federer. He may not have played on Hisense in 10 years, but it brought his 70th match-win at the Australian Open in his record-breaking 57th consecutive Grand Slam.

He already leads the Open era record for Grand Slam match-wins by some distance—the total is now up to 262—and if he reaches the fourth round at Wimbledon and the US Open, he would become the first man to reach 70 match-wins in three different Grand Slams. Incidentally, a third-round run at Roland Garros would take him to 60 there—and mighty Nadal has still only scored 59.

Since his first win in Australia in 2000, Federer has yet to fall before the third round and has not fallen short of the semis since that first title in 2004. Little wonder that Australia is special to him, and was his chosen venue to celebrate another No10, the years since he set up his Foundation.

The man who could halt Federer’s semi-final record in Melbourne is the same man he beat in the quarters last year, Jo-Wilfried Tsonga. The No10 seed was the man to benefit from the roof closure mid-match on Hisense, and he advanced past Tomaz Bellucci in easy style, 7-6, 6-4, 6-4.

Tsonga, much like Federer, is looking in very fine shape and form. His next opponent, too, will come in the shape of either Marin Cilic or Gilles Simon, both of whom survived gruelling five-set openers and were locked into a similar battle as midnight approached. A stormy day for some, but every cloud has a silver lining—in this case for Tsonga.

Beyond Tsonga, Andy Murray has returned from his lay-off after back surgery with a vengeance. The three-time Australian runner-up almost came unstuck after winning his first two sets with ease. Qualifier Vincent Millot broke twice in the third to serve at 5-1 before Murray upped the intensity that had drained out of him for 20 minutes, and raced through six straight games to take the match, 7-5.

In the face of future obstacles, though, Federer remains cool. Asked what he enjoys about his life, he mentioned wife and children, sight-seeing and, of course, playing tennis, before adding with a smile: “What else? Playing in 42 degrees heat.”

The temperatures may be set to fall, but the competition is hotting up nicely.