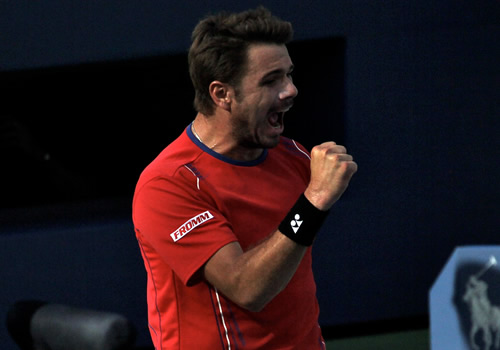 Even before Novak Djokovic began the defence of his title at Melbourne Park, the man who has been unbeaten at the Australian Open for the last three years was the favourite for a record fourth straight title.

Ahead of the match that could take him to a 15th consecutive Grand Slam semi-final, the Serbian was on a 28-match winning streak. Since losing in the US Open final to Rafael Nadal, the man who had been ranked No1 for most of 2013 had notched titles at Beijing, Shanghai, Paris, and the ATP World Tour Finals in addition to the three he had already won in Monte Carlo, Dubai and Australia. He had, incidentally, also reached the Wimbledon final and Roland Garros semis.

As if that was not enough, Djokovic had even begun his preparation for Melbourne with a record third victory at the showcase Mubadala World Tennis Championship in Abu Dhabi, beating Jo-Wilfried Tsonga and David Ferrer in the high-class exhibition knock-out.

And when the Australian draw was made, Djokovic became an even hotter favourite, for every other Grand Slam champion and all the primary threats—Nadal, Andy Murray, Roger Federer and Juan Martin del Potro—were drawn in the opposite half.

And if all that was not enough, Djokovic had just taken on a new coach in the formidable shape of Boris Becker—to help the Serb find just a bit more.

Yet one match did leap off the draw sheet, one that might ask big questions of the near-flawless Serb. In the quarter-final, he could meet No8 seed Stan Wawrinka, who took him to 12-10 in the fifth set in this very tournament last year. It was one of the matches of the tournament, one of the best of the year, but that was not the end of it for Wawrinka.

The Swiss man had certainly never wanted for ability, power, nor fans of his one-handed backhand—a match-winning shot in its own right. But after taking up with Magnus Norman ahead of the 2013 season, Wawrinka’s tennis had become more aggressive and forward-moving, his physical shape sharper and more durable, and that combination produced his best results since he first broke into the top 10 in 2008.

Having all but fallen from the top 30 in 2012, he edged back to No17 for that storming Australian Open contest, and went on to reach his first Masters final since 2008 in Madrid, and followed it with a quarter finish at Roland Garros. Come the US Open, he reached his first Grand Slam semi by beating Murray in a sizzling display of attacking tennis, before again pushing Djokovic to the limit, leading two sets to one before losing another classic match in five.

Through the season, he accumulated nine wins over top-10 players and reached a career-high No8 in the rankings to qualify for his first World Tour Finals.

Yet through all the successes and top-10 scalps, he had still failed to make the breakthrough against Djokovic. After their two classic five-setters at two Majors, he ended the year with two clear-cut, two-set losses to the Serb, first at the Paris Masters and then in London. Their head-to-head made stark reading: Wawrinka had suffered 14 consecutive losses since 2006.

So despite all his tennis assets, his burgeoning confidence, and his Chennai title at the start of 2014, he faced the most daunting of tasks once again.

This year, it took a while for the contest to get going. After three games, they had combined to make 10 unforced errors for only 3 winners: This was nervy tennis. Djokovic settled first, though, and began to ply his baseline trade, and Wawrinka appeared willing to trade with him at the back of the court—though it was forward-moving tennis that had yielded such success at the US Open.

Djokovic began to draw more errors with his pin-point, corner-to-corner hitting to break in the sixth and again to take the set, 6-2. He had hit only four winners, but Wawrinka’s 16 errors and only three points won at the net spelled trouble.

But the Swiss man’s gritty self-belief of the last 18 months is literally etched on his forearm in the Beckett quote “Ever tried. Ever failed. No matter. Try again. Fail again. Fail better.”

He dusted himself off and started all over again, and the winners started to come. His turn in fortune pivoted on his opening game, 0-30 down and with a failed challenge on his first serve. He came through with a hold and a roar of encouragement, had chances to break in the next game, fired up some 132mph serves, and played some pulverising tennis in the seventh to break.

He was now withstanding Djokovic at what the Serb does best, controlling long, hard-hitting rallies from the baseline. In the cool conditions, Wawrinka seemed the one able to generate power through the court, and took the set, 6-4.

The packed arena, clearly aware of the marathon these played here last year, cheered on every bold attack from Wawrinka in anticipation of more of the same. In truth, though, the Swiss did not need to be at his best to break in the third game of the third set: He was helped by some patchy play from Djokovic. But he did earn his second break in the fifth, and finally served out the set, 6-2.

By the start of the fourth set, both men had garnered over 30 errors but Wawrinka had 27 winners to Djokovic’s 17. The Serb had to defend deuce in the first game, too, but finally his level rose closer to its norm as he eliminated the errors, served better, threw in some successful net plays and one or two screaming winners. Wawrinka was slow to respond, and Djokovic broke in the eighth to serve through a break-back point and level the match 6-3. The Serb roared himself on and demanded the same support of the crowd

So just as in both their Grand Slam meetings last year, these two would take it all the way. But momentum is a powerful force, and Djokovic rode his to break in the third game. His defiant fist pump was worthy of a match-win, but it proved to be premature. A weak service game handed the break straight back, and Wawrinka survived the longest rally of the match to survive another break point.

There was no denying that Wawrinka was up against it, fending off break points again at 3-3 with a 136mph ace, and then at 40-15 and 5-5, play was stopped for rain. Fortunately, it just a matter of minutes before they continued, still with no roof, and Wawrinka hit an ace to hold.

The fifth set was now an hour old, but they headed to 6-6, then 7-7, but it would not reach 8-8. Serving at 7-8, Djokovic found the net with a couple of forehands before a freak backhand drop shot from Wawrinka brought up match point on the dot of four hours. Shockingly, a wild volley from the defending champion handed the Swiss his first Australian semi and, with it, more new ground for the bold and gutsy Wawrinka.

Wawrinka’s win guarantees a new name in the Australian Open final: He will play Tomas Berdych for that honour, and should be buoyed up by having scored wins over the Czech in their last three matches, notably at the US Open and the ATP World Tour Finals.

But with both 28-year-olds proving that good things come to those who wait, it should be a cracker.