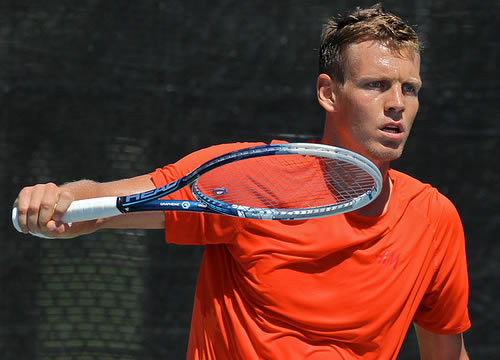 Tomas Berdych reached the last 16 at the Australian Open for the fourth year running as he won in three sets against surprise package Dami Dzumhur.

Berdych needed 105 minutes to defeat the Bosnian 6-4, 6-2, 6-2 and set up a clash against South African 19th seed Kevin Anderson whom he has beaten in each of their nine encounters.

And the Czech, who is seeded seventh, feels his game is in good order after overcoming the on-court conditions which once more hit 41C in Melbourne.

I feel good on the court, that’s important for my game

“Today was really the hottest conditions that I have ever experienced on court, especially in the first two sets. So I proved to myself that everything is going well. I feel good on the court, that’s important for my game,” said Berdych.

After a third consecutive straights set win in Melbourne, Berdych paid tribute to his 188th-ranked opponent, who became the first man from his country to qualify for a Grand Slam.

“I think we might see him here for another couple of years. He’s very hungry. I think he’s very talented,” said the 28-year-old, who has never gone past the quarter-final stage at this event.

Dzumhur knocked out 32th seed Ivan Dodig in the previous round, but despite noisy support once more inside the Hisense Arena, he believes nerves got in the way of his performance.

“It was really tough. Berdych is one of the best players in the world. When he is playing well he can beat anybody,” Dzumhur said.

“I just couldn’t play my best because I was a bit stressed. He was serving really well and on this occasion he was much better [than me].”

The Spaniard has now reached this stage for 15 Majors running and will face Germany’s Florian Mayer who has never made it to this stage at the Australian Open.

Ferrer, who saved five set points in the second set, said of his victory against the 29th seed: “Maybe it was my best match this week. I tried to play every point and to be focused during every point.

“The key was winning the second set.