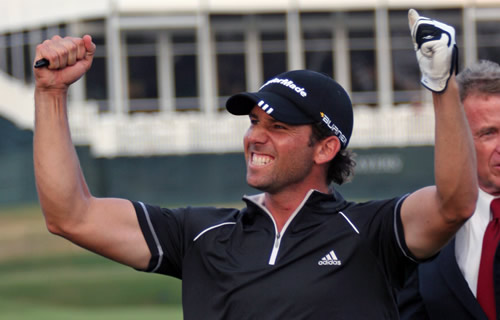 As the light faded at the Doha Golf Club on the Persian Gulf, Sergio Garcia once again highlighted why he’s so often considered as one of the best players to have not won a major.

The 34-year-old ensured he wouldn’t suffer similar heartache to that experienced 12 months ago at this event by defeating Mikko Ilonen on the third play-off hole of the Commercial Bank Qatar Masters – Garcia had earlier shot a near-flawless final round of 65 to set-up a shoot-out with the Finn.

Although Pablo Larrazabal, Rafael Cabrera Bello and Gonzalo Fernández-Castaño have emerged as the next generation of Spanish golfers, Garcia continues to reaffirm his rank as the Iberian nation’s golfing protagonist.

In a week which compatriots Juan Mata and Rafael Nadal have dominated the headlines, Garcia ensured his own column inches with his eleventh European Tour victory and his first victory since the 2011 Andalucía Masters.

Beginning Saturday’s fourth round three shots behind the leaders – Cabrera Bello and England’s Steve Webster – the Spaniard carded a bogey-free 65 to set the clubhouse target of 16-under-par.

He then was forced to watch as Ilonen birdied two of the final three holes to force a play-off after Cabrera Bello finished one behind alongside Thorbjorn Olesen.

The players returned to the 18th for the play-off, and with little to separate the pair after two attempts, the third extra hole proved decisive.

Ilonen found the greenside bunker for the second time and after Garcia found the heart of the putting surface, the Finn couldn’t salvage a birdie four. That left Garcia with a tap-in to secure the title and invaluable Ryder Cup points.

“It feels good,” said Garcia, who will move from 11th to inside the world golf rankings’ top ten on Monday.

“It’s funny because I started the day thinking if I can shoot six or seven under maybe I can have a chance, and it turns out I had a very similar putt that I had last year to get it to 17 under on 18; I hit a good putt and unfortunately it didn’t break.

“The up and down from the bunker in the play-off was key and I’m very happy to be able to win it.”

Asked about the pressure of contesting his seventh European Tour play-off – having won two and lost four – Garcia added: “I almost feel less pressure because you feel like you’ve had a great week already and if you win it’s kind of like a little bit of a bonus.

“It’s been an amazing week already and I was definitely more nervous on my tee shot on the 18th (in regulation) than in the play-off. That’s probably why I hit three better tee shots.”

Garcia had not finished outside the top 25 on his previous seven visits to Qatar and added: “I have always said it’s a golf course that I enjoy and I am very pleased to finally be able to get my hands on the trophy. We’ve been coming here for eight years and have been quite close to winning before.”

Olesen had a great chance to join the play-off but missed from 15 feet for an eagle on the 18th, the Dane sharing third place with Cabrera-Bello. Meanwhile, Webster tied for fifth and Scotland’s Paul Lawrie finished strongly to finish just outside the top ten.

Elsewhere, Phil Mickelson has been forced to withdraw from the Farmers Insurance Open after two rounds due to a back injury. The American was eight shots behind leader Jordan Spieth, who stormed into the lead on Friday with a nine-under-par 63 to claim a one-stroke advantage.