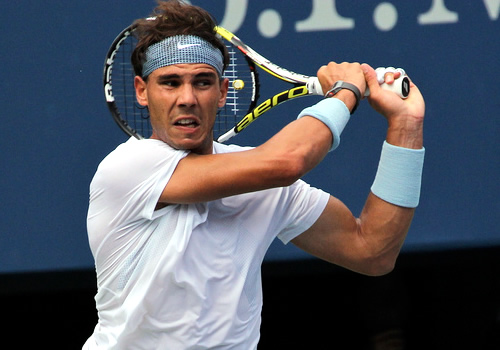 Rafael Nadal is currently ranked No1 in the world Photo: Marianne Bevis

The problem with arriving at the first tournament of 2014 on the back of one of the best ever comeback seasons in tennis is to manage expectation.

After seven months away from the tour, Rafael Nadal announced himself with a bang less than a year ago to notch up 10 titles, including the 60th title of his career with his 13th Grand Slam at the US Open. And the wins did not just come on clay: He put together an unbroken 27 wins on hard courts that was only halted by Novak Djokovic in Beijing in October.

The remarkable Spaniard could not cap 2013 with the World Tour Finals trophy but he did claim the year-end No1, with one more match-win than world No2 Djokovic. And with no points to defend until after the Australian Open swing, there is every expectation that he will increase his lead over the Serb at the top of the rankings before heading back to clay in February.

Nevertheless, Nadal’s superhuman achievements of 2013 set the bar high even by his standards. Yet despite winning the Australian Open title in 2009 and finishing runner-up in 2012, Nadal has rarely shown his best form ahead of the opening Grand Slam in Melbourne. Indeed, in his dozen years as a pro, he has reached a final at one of the five warm-up 250 ATP events just three times: in Auckland in 2004, in Chennai in 2008 and in Doha in 2010. He won none of them.

His opening matches were thus far typically low-key in 2014, as well. He opened with a loss to David Ferrer in straight sets at the lucrative six-man exho event, the Mudabala World Tennis Championship in Abu Dhabi.

On to Doha, he was also made to fight at every turn. He sealed his opener against Lukas Rosol in a 9-7 tie-break, then dropped a set to Tobias Kamke in the second round, and was pushed hard by the only seeded player he will meet in the tournament, Ernests Gulbis. The No7 seeded Latvian, who took the first set from Nadal at both Indian Wells and Rome last year, made him fight off deuce before conceding the first set 7-5, and went 3-0 up in the second before Nadal raced back to win 6-4.

The Spaniard’s semi-final against the 162-ranked qualifier Peter Gojowczyk was expected to be an altogether easier affair. The German was not only playing his first tour semi-final but had won just one tour-level match before this week, taking out Igor Sijsling in the first round of the US Open last year.

Bearing in mind that Gojowczyk had survived two tough matches in a row before facing Nadal—two tie-breaks in the second round and a third-set tie-break in the quarters—it looked an uphill task, but it would eventually take Nadal two hours to tame the German.

Gojowczyk won the first nine points to break Nadal for an early 3-0 lead, and although Nadal levelled at 3-3, the German continued to stand toe-to-toe with Nadal at the baseline, broke again, and took the first set, 6-4.

Nadal had hit just one winner to 10 from Gojowczyk, but he immediately regrouped to break in the first game of the second set, and then in the third, taking a 4-0 lead. He served out the set 6-2, now looking more energised and far more like the world No1.

Nadal dropped just one point out of 14 on his first serve in the entire second set, and appeared to have finished the job with a break in the very first game of the third. But a brief lapse in his concentration yielded a couple of errors to his opponent and the break back, but that seemed only to galvanise the Spaniard. In the longest rally of the match, Nadal reasserted his dominance in a heavyweight battle from the baseline and broke back at the fourth time of asking to lead 2-1.

Now the errors began to pepper Gojowczyk’s game, while Nadal threw in a couple of inch-perfect drop shots among some resounding down-the-line forehands. The German could resist no longer, and Nadal broke to love to seal his place in the final, 6-2.

Nadal may never have been in a better position to win a title before Melbourne: All the top seeds fell before the quarter-finals in a tough draw that originally contained Ferrer, Andy Murray, Tomas Berdych and Richard Gasquet. But the Spaniard’s problems are far from over.

His final opponent, Gael Monfils, may be unseeded but the Frenchman’s huge talent has taken him inside the top 10 in the past. Monfils returned to form with a vengeance last season after injury, rising from 119 in May to a current 31, and he beat Berdych at the French Open, Roger Federer in Shanghai and Gasquet here in Doha.

More significant, though, Monfils has scored only two wins over Nadal in 10 previous meetings, and both were in Doha.

And if Monfils’ stunning performance against Florian Mayer in the other semi is anything to go by, Nadal will need to start as strongly as he finished against Gojowczyk’s to avoid the same fate as his other Doha visits. The Frenchman set alight the late-night crowd in Doha with a sparkling 55-minute display of 30 winners, beating Mayer 6-3, 6-2.

But considering the flamboyant Frenchman won his quarter-final in just 49 minutes, perhaps that means is going off the boil. Nadal will hope so!