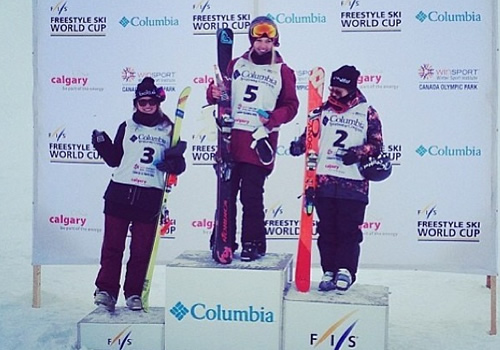 Rowan Cheshire made history as she became the first-ever British woman to win a halfpipe skiing World Cup title in Calgary.

Cheshire, a bronze medallist at last season’s World Junior Championships in Valmalenco, has long been tipped for a bright future but few expected such a breakthrough so early.

The Stoke-based skier only cracked the top ten for the first time in her last World Cup appearance and is on her first full season on the senior circuit.

And there was more good news for the British team as another high-flying teen, Emma Lonsdale, secured her career best finish in tenth.

Both are coached by Pat Sharples, who has also guided the careers of slopestyle specialists James Woods and Katie Summerhayes, already established regulars on World Cup podiums.

“It’s only my first full year competing at this level and the important thing is I need to keep progressing and improving,” said Cheshire, earlier this week.

“This sport is quite a mental game and I’m learning how to compete and not allow other factors to get to me.

“I’ve tried to put the Olympics out of my mind because it does put the pressure on.”

The last British woman to top a World Cup skiing podium was freestyle skier and two-time Olympian Jilly Curry in 1992.

“In training we have been working hard with Rowan on new tricks and we knew she had the potential to podium,” said Sharples, who shares Cheshire’s coaching duties with halfpipe coach Jamie Matthews.

“She is so dedicated and all the hard work has now paid off with this win.”