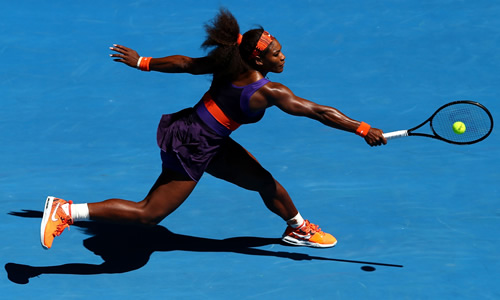 Serena Williams battled past Maria Sharapova 6-2 7-6 (9-7) to set up a final clash with Victoria Azarenka at the Brisbane International.

The world No1 stretched her 10-year unbeaten streak over the 26-year-old by grinding out her 14th straight win over the Russian to reach Saturday’s showpiece.

Williams has not lost to Sharapova since 2004, when she won Wimbledon aged 17 – and the American is at a loss to explain her dominant record over her rival.

“She’s such a good player, so it’s kind of hard to explain. I don’t know,” said Williams. “I think every time I play her she brings something different.”

Sharapova, meanwhile, who ended her 2013 season in August due to a shoulder injury, looked on the bright side despite the defeat.

“I really have to take the positives out of this because I have been struggling for a few months,” said Sharapova. ”

“To be able to come out on the court and put myself in good positions out there against someone that’s been playing amazing tennis is a good sign for me.

“I’m happy that I can compete at this level in my third match back. It was tough not seeing my name in the draws and tough seeing everybody playing tournaments and you’re just kind of going about trying to find a way to heal an injury and a bit unsure when that will happen. [There were] a lot of question marks.”

Azarenka will face Williams in Saturday’s final after coming from a set down to beat Serbia’s Jelena Jankovic 1-6 6-3 6-4.