Sochi 2014: Eve Muirhead claims some major scalps to further boost her confidence on the countdown to the Olympics 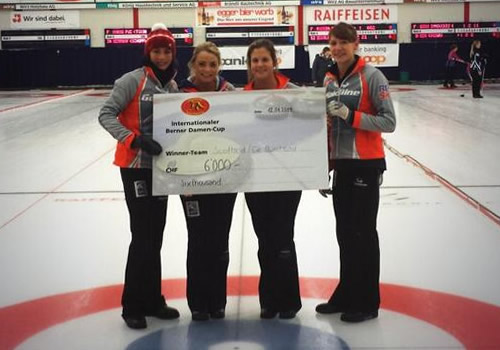 World curling champion Eve Muirhead claimed some major scalps to further boost her confidence on the countdown to Sochi.

Alongside her rink Anna Sloan, Vicki Adams and Claire Hamilton, she beat Germany’s Andrea Schöpp in the semi-finals and then claimed the prize of Russia’s Anna Sidorova – who recently won gold at the Winter Universiade – to claim overall victory.

Muirhead’s rink will now join their men’s Olympic team-mates, skipped by three-time Olympian David Murdoch, at this week’s Continental Cup in Las Vegas, where the best of North American curling will be challenged by the rest of the world.

And Muirhead will get a chance to avenge her recent defeat in European final in her first match in Sochi, after the schedule was revealed by the World Curling Federation.

The British skip will face Swedish rival Margaretha Sigfridsson’s while Murdoch will open up against hosts Russia.

Lizzy Yarnold continued her podium run with a silver medal at the skeleton World Cup in St Moritz. The World Cup leader now has seven straight top three finishes and was only bettered by American rival Noelle Pikus-Pace, heightening what promises to be one of the biggest rivalries in Russia.

British world champion Shelley Rudman, on her favourite track, took her first podium of the season with a bronze while Kristan Bromley posted a fifth place in his best finish of the campaign in the men’s event.

However, there was disappointment for Rose McGrandle, who is seeking to qualify a third British women’s slider for the Games for the first time. She made a key error on her first run and finished 23rd, putting pressure on ahead of the final event in the Olympic qualifying campaign this weekend in Igls.

Meanwhile, Britain’s first choice bobsleigh driver John Jackson showed signs of a return to the form that recently won him silver in Lake Placid with an encouraging tenth in the four-man but he still faces a tough battle to secure the Olympic standard in the two-man event after ranking 21st alongside Bruce Tasker.

Paula Walker and Rebekah Wilson secured eighth in the women’s bobsleigh, their best finish of the season, while skeleton slider Laura Daes took bronze in the Intercontinental Cup in Park City, Utah.

Snowboarder Billy Morgan made an encouraging return from his knee injury at the US Grand Prix in Breckenridge.

However, bad weather meant the final was cancelled, which also meant Jenny Jones didn’t have a chance to continue her injury comeback after ranking fourth in qualifying for the women’s slopestyle, Aimee Fuller was 13th.

World Cup medallist Katie Summerhayes, in her first event after her knee injury, ranked 20th in the ski slopestyle World Cup in Colorado while team-mate Anna Vincenti was pleased with her 16th, despite failing to make the final.

Rowan Cheshire, fresh from her recent World Cup win, pulled out of the ski halfpipe World Cup in Breckenridge with a knee niggle – though team officials insisted the problem was slight and the withdrawal was just a precaution – while Emma Lonsdale and James Machon both missed their finals after placing 17th and 21st in qualifying.

Zoe Gillings dropped out of the top ten in overall World Cup standings after a 17th and 20th in two snowboard cross events in Vallnord-Arcalís.

And it was a frustrating weekend for Britain’s alpine skiers, Europa Cup champion Dave Ryding failed to complete his third World Cup slalom of the season after skiing out during the first run in Adelboden. Dougie Crawford and TJ Baldwin both failed to finish the Europa Cup men’s downhill in Wengen.

Meanwhile, X Games organisers have confirmed prized invites for four British skiers and snowboarders ahead of this month’s showpiece event in Aspen.

Six Nations 2014: Rory Best back in form to boost Ireland