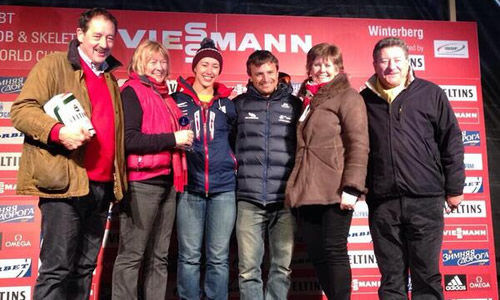 Lizzy Yarnold paid tribute to coach Andi Schmidt as she maintained her dominance of the women’s skeleton World Cup standings.

Yarnold claimed her third victory of the season – and her fifth consecutive podium – to edge out closest rival, American Noelle Pikus-Pace, in Winterberg.

“We always have a race plan but Andi suggested we try something different on the second run to give me that extra bit of speed,” said Yarnold, who was tied with Pikus-Pace after the first run but ended up winning by half a second.

“It obviously worked and it shows that sometimes you have to mix things up a bit to push yourself forward.

“I’m starting to dream ahead now to Sochi.”

And with just two women’s races remaining until qualifying slots are confirmed for next month’s Winter Olympics, McGrandle’s performance was crucial.

Great Britain are seeking to qualify three women sliders for the first time and more of the same from McGrandle in St Moritz this week and Igls the week after could secure that ambition.

“I’m really pleased with my second run, it pulled me from 17th to a top ten position and gives me great confidence for my debut on the circuit,” said McGrandle, who was promoted to the World Cup team after a series of wins on the Intercontinental Cup circuit.

However, slender hopes of qualifying a third men’s slider for Sochi sustained a major blow with Ed Smith admitting his frustration after failing to qualify for a second run, placing 22nd overall.

Elsewhere, Donna Creighton – who started the season on the World Cup squad – claimed bronze at the Intercontinental Cup race in Whistler, with team-mates Laura Deas 11th and David Swift 15th.

The 18-year old became the first Britain woman to win a skiing World Cup title since freestyle skier Jilly Curry in 1992 with a victory in her signature halfpipe event.

And team-mate Emma Lonsdale completed a memorable day for the British free ski team with a tenth place, while Murray Buchan and James Machon, despite failing to make the final, posted solid results in qualifying, 13th and 16th respectively.

“It came as a bit of a shock,” admitted Cheshire, a world junior bronze medallist last season.

“I have been working well in training and I thought I could make the podium if everything went well. I didn’t think I could do that well though.

“I’ve been training hard for the last month in Colorado and it’s paid off; it puts me in a good place to qualify for the Games. I had a bit of a bad crash in practice, but I tried to pull it together in the comp even though my heart was racing.
“I’m so glad I was able to do that and get my run down how I wanted to. I think it was my 900, the cleanliness of my run and the amplitude which sealed it for me.”
Andrew Musgrave continues to produce his best-ever form after securing a career high finish in the Tour de Ski.

The 23-year old Scot, who secured his highest World Cup points finish in the event’s prologue in Oberstdorf, finished ninth in the concluding stage in the Italian resort of Val di Fiemme.

Britain’s number one bobsleigh driver John Jackson will be keen to move on from Winterberg, after some frustrations at the German venue.

But the news was worse in the two man, admittedly not Jackson’s priority event, where alongside Bruce Tasker he finished 27th of 27 crews, one place behind British team-mates Lamin Deen and John Baines.

“It was a disappointing weekend as a whole,” said Jackson, who is still not pushing at full capacity after an Achilles injury.

“There’s only two more weeks until the Olympic qualification deadline and it’s a new week to focus on better results.”

Slalom skier Dave Ryding claimed second at the first Europa Cup in Chamonix, with only former world champion Jean-Baptiste Grange finishing ahead of him while moguls skier Ellie Koyander finished 35th in her World Cup event in Calgary.

“It was a fantastic result behind Jean-Baptiste Grange who was world champion three years ago,” said Ryding.

“I can really take confidence from the way I am skiing at the moment and Sochi is still a long way away for me so I don’t need to think about it just now. I am just taking it race by race, pushing myself and trying to improve.”