Alvaro Negredo insists Man City are not out of Barcelona tie 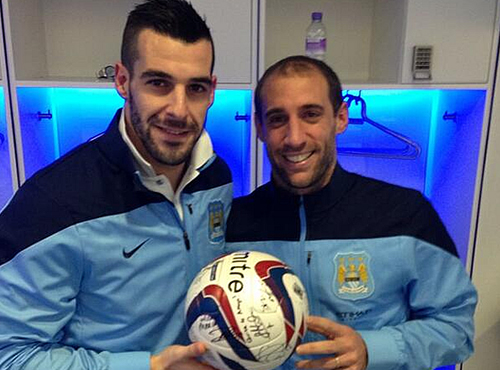 Alvaro Negredo insists that Manchester City will give their all in the second leg of their Champions League last-16 clash at Barcelona.

Manuel Pellegrini’s men had their hopes of reaching the quarter-finals severely dented on Tuesday night as goals from Lionel Messi and Dani Alves handed the La Liga champions a commanding lead heading into next month’s return leg.

We must score early, withstand the pressure and not concede

But despite the size of the task which awaits them at Camp Nou, Negredo says that the Citizens will approach the game with a positive attitude.

“We will go to Camp Nou to fight, even though we know it is so difficult,” said Negredo.

“We must score early, withstand the pressure and not concede, but it will be very difficult.

“We have got great players to put up a fight in the second leg and we will try to play a good game at Camp Nou, to make it uncomfortable for them.”

City boss Pellegrini also insisted that his side are refusing to concede defeat in their bid to reach the last eight.

“I’m not confident [that the game is over], but it’s true we did a good game away and we must now repeat the same performance at home,” said Pellegrini.

“We’re going to keep on playing with the same intensity, the same commitment to the second leg.

“We have a tough rival, almost at the same level – the only difference is that we won an away game but we can’t forget that City lost to Munich at home but beat them away.”

Liverpool must believe they can win the title, says Ian Rush