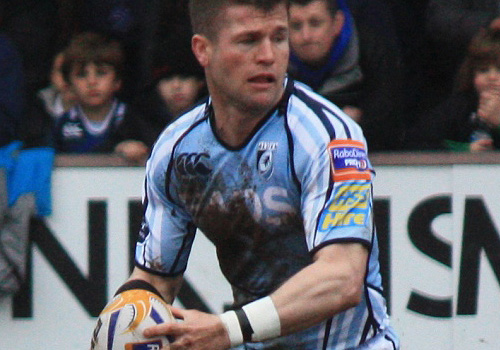 The former Wales outside-half joined the Devon club from Cardiff Blues in the summer as competition for Gareth Steenson and Henry Slade and the 34-year-old is enjoying his new environment.

He’s one injury away or one player’s lack of form from coming in and having to run a Heineken Cup campaign for you. Ceri’s done that

“I’m really happy and I’ve enjoyed the year so far and playing down here,” Sweeney said.

“I’ve not had too many opportunities to play, but it’s a good environment and I’m delighted to have been asked to stay on for another year.

“Certainly it’s lived up to expectations for me and coming to Exeter was a new and fresh challenge, which has reinvigorated me a bit. For me, it’s been nice working with different people in a different environment.

“Obviously playing in Wales for so long, it’s a small environment and everybody knows what is going on, but in the Premiership it’s different ideas, different styles and different teams and that is the exciting part of it all. Every week is a tough challenge and brings up different obstacles.”

Sweeney began his career at Pontypridd before joining the now defunct Celtic Warriors region before spending much of his playing days with the Newport Gwent Dragons region.

The Chiefs star stayed with the Blues for five seasons, and the half-back believes the Premiership offers something more than the Celtic League.

“I think the biggest difference I’ve found is that every game is a big game in the Premiership,” he added.

“Every week there is something on the game and the intensity is right up there. Also the crowds are great because even with the LV= Cup games, we’re still packing them in here and getting lots of people through the gates.”

Sweeney’s new deal will see a transition into a coaching and mentoring role for the club’s young stars alongside trying to get more Premiership game time alongside the Chiefs’ cup campaigns.

“Realistically, I am that little bit older and I know where I am within the squad, but I’m still pushing hard and I want to be playing like everyone else,” he said. “I still I can do a job and when I have played, I think I’ve done alright, so hopefully I’ll keep pushing the boys and hopefully get a chance at some stage.

“[Coaching’s] definitely something I’m interested in. Luckily I’ve got a lot of experiences and I’ve been in that situation myself in the past. Also I like working with the younger boys here because it’s good to see them develop and help them with parts of their games.”

Chiefs head coach Rob Baxter believes retaining the experience of the 35-times capped Wales international is a boost for the club on and off the pitch with other clubs looking for options at 10.

“Ceri’s in one of those positions that’s very important in a rugby side,” Baxter said.

“He’s in a key position at fly-half and if Steeno and Sladey go pretty well he might not get much game time, but at the same time he’s one injury away or one player’s lack of form from coming in and having to run a Heineken Cup campaign for you. Ceri’s done that.

“He’s an ideal person for us because we could put him in there and we’d be very comfortable with him starting, or he can be on the bench or he can run our LV= Cup side as skipper – he has a lot of skills.

“Also he is a particularly good guy around the squad. He understands that some of his role will be helping other players around him and a large part of his role is making sure he’s bang on form when his opportunity comes to play. Ceri’s been very good at that.”