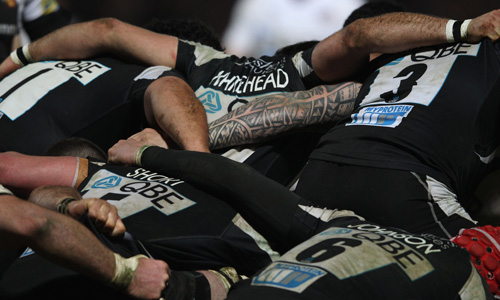 Kai Horstmann has praised the unique club culture at Exeter Chiefs as a deciding factor in signing a new contract with the Aviva Premiership side.

The 32-year-old Zimbabwe-born forward has been an integral part of the Chiefs side since joining from Worcester Warriors in 2012 and his performances for the Devon side has led to a new one-year deal, keeping him at the club until the summer of 2015.

“I’m really pleased to have signed on again,” Horstmann said. “I enjoy it here, I’m enjoying the rugby we play and my family are very settled as well. Obviously my first year was hugely frustrating because of the injury, but I’m getting there and now I’m enjoying what I do.

“The Chiefs is a great club to be at and a huge part of me signing on again was down to the people that are here. The culture here is different, but that’s not a bad thing in any way. Like most good things, it starts from the top.

“The club is driven by a huge amount of heart and passion and by guys that believe in the club and who have been here for a long time. That filters down within the playing side of things as well because we have some real characters and leaders, together with people who want to do well.

“It’s that culture which is helping to drive the club forward and wanting us to achieve things. As I said, a big part for me signing on again was the group of players that are here. The culture we have; the coaching that we receive and where the club wants to get to and how competitive it is, it’s a great environment to work in.”

The experienced back-row forward joins club-mate Haydn Thomas in agreeing a new contract this week as the Chiefs build a squad for next season, with Glasgow Warriors and Scotland prop Moray Low and Leicester Tigers and England No 8 Thomas Waldrom set to bring even more experience to Sandy Park in the summer.

Despite his place in the starting XV being under threat, Horstmann is relishing the challenge.

“The back-row is a hugely competitive position anyway,” he said. “In order to be a successful side you need to have strong competition in every position. Certainly we have that here already and I’ve no doubt it will be the same next season.

“Of course it’s exciting, but it can also be frustrating at times. However, that competition will push you to work harder and then when you get your opportunity, it’s up to you to make the most of it and show the coaches what you are capable of.

“It’s nice that [head coach] Rob [Baxter] rates you and that he wants you to be a part of things,” he continued. “He always plays a straight bat, he’s honest and you know where you stand with him. For me, signing on again was all fairly straight-forward simply because I was happy and settled, the club wanted me to stay, so it was just a case of sorting out the necessary details in the end.”