It has been a very impressive 12 months for the 22-year-old Grigor Dimitrov, writes Marianne Bevis 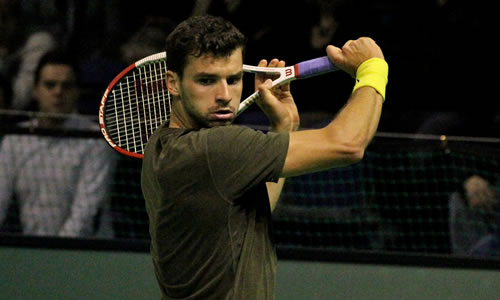 Grigor Dimitrov is the youngest player in the top 20, the youngest seed at the ABN AMRO tennis tournament, and very nearly the youngest man in the entire Rotterdam draw—though that honour actually goes to another young star appearing over the horizon, 20-year-old Dominic Thiem.

And this week marks another significant milestone for the tall, dark and handsome Bulgarian who has become one of the biggest attractions on the tennis tour. For the elegant Dimitrov, he of the near double-jointed single-handed backhand and a slice as deadly as a razor, is playing in his first tournament since breaking the top-20, which he did last month courtesy of his first Grand Slam quarter-final in Australia.

Indeed it has been an impressive 12 months for the 22-year-old.

Around a year ago, Dimitrov reached his first tour final in Brisbane. He took the king of clay Rafael Nadal to three sets in Monte Carlo, and beat the then No1 Novak Djokovic in Madrid. That earned him his first seeding in a Grand Slam at Roland Garros, and come Stockholm in October, he took his first title, beating No3 David Ferrer from a set down.

In a sequence of tough draws, however, he then faced Roger Federer in Basel—and pushed him to a tie-break before losing—and Juan Martin del Potro in Paris, where he took the first set.

It had been a similar story in Rotterdam last year, where Dimitrov lost in the semis to del Potro, leaving the Argentine to go on to take the title. But the seeds of a slow-burning rise to fame and fortune for the Bulgarian were there very early, not least at this very tournament.

In 2009, at 17 years old, the 478th-ranked Dimitrov won his first main-tour match, and against the formidable Czech, Tomas Berdych. In the second round, he pushed the top-ranked Nadal to three sets. Ever since, he has ended every year at a higher ranking.

But because Dimitrov showed such talent and crowd-pleasing style from such a young age, it seems as though he has been around for years, a player tipped to break into the elite ranks ever since he captivated Wimbledon by winning the junior title. His reputation was gilded not a little by the strong allusions in his game to that tournament’s favourite son, Federer.

In the event, it took Dimitrov time to mesh his many skills, to grow into his rangy frame and develop the consistency—and concentration—needed to put a title-winning run together.

Having rattled up the rankings from 360 to 60 in the space of 12 months, he slipped behind some of his contemporaries: Milos Raonic and Jerzy Janowicz both beat him to the top 20 and beyond.

But last year saw Dimitrov finally blossom, and although the former US Open junior champion struggled to find his form on the autumn hard courts—he lost in the first round in New York, Beijing and Shanghai—Stockholm saw the whole package gel, and his standing has continued to rise.

People think people cry because they are weak. And to me it’s that you’ve been strong for so long

A switch of coach to the energetic Roger Rasheed reinforced Dimitrov’s intention to improve stamina, strength and fitness, and the relationship is already a happy and fruitful one. In Rotterdam, he spoke eloquently—another quality that has burnished his appeal—of the partnership.

“We all have our differences, but when it comes to the very important stuff, the values of what we have to do and our goals, we come to an agreement. I think it’s great for a coach and a player when it reaches that point where something special is going on, and I want to keep that: I think he feels the same way.

“Whatever we think or feel, we are not afraid to say or to hurt each other’s feelings.

“I’ve struggled through the years with coaches—I’ve changed a lot—but he brought a structure to my life and on court.”

Even though Dimitrov’s loss to Nadal in Australia had reduced him to tears of disappointment, it was, in reality, a fine showing. He had chances to win the third set in what became the closest of four-set losses, but he elaborated tonight, again with both perception and maturity, on the positive impact of the loss.

“People think people cry because they are weak. And to me it’s that you’ve been strong for so long. For me, the tears I had were that. It was a missed opportunity. It hurt. You have to have that in your mind, keep it in a special spot. It’s going to come around and you are going to do better. And I am not afraid to face that moment again.”

The first round in Rotterdam was his chance to show the grit and confidence he has learned to marshall. He played a tough opponent, the 28-ranked Dmitry Tursunov who, at almost 10 years Dimitrov’s senior, had put together his best single-season rise in the rankings in 2013, up from 125. His challenge was not to be taken lightly.

Sure enough, it was Tursunov who broke first to go 2-0—but he did not win another game in the set. Dimitrov blended big serving with baseline attack, forays to the net and some Djokovic-like defensive reaches.

The wily Tursunov quickly turned the tables to break early in the second set, and with Dimitrov sprinkling errors, levelled the match, 6-1.

The third set kept the vocal crowd on the edge of their seats as the two men exchanged early breaks, and then dug in for the best tennis of the match. At 4-5 down, though, Tursunov took a medical time-out for his back. He fought off two match points—one with a stunning 36-stroke rally—but with the match poised at 78 points apiece and two hours on the clock, Dimitrov broke at the third time of asking for a 6-4 victory.

As luck would have it, he next faces another man who has carried the burden of “the next big thing” since breaking the top 50 in his teens. Ernests Gulbis has talent and power in spades and very nearly broke into the top 20 three years ago. He is still only 25, and back at 24 in the rankings after taking two titles last year. He earned his face-off with Dimitrov following a 6-4, 7-6 dismissal of Denis Istomin.

Another of the tour’s great prospects, the 23-year-old Jerzy Janowicz, broke into the top 20 on the back of an eye-catching semi-final finish at Wimbledon last year. He subsequently dropped just behind Dimitrov after spates of injury—though he is back to No20 this week.

The 6ft 8in Pole, drawn in the same half as Dimitrov and Gulbis, scored his first win at this event over No39 Julien Benneteau. It took him three sets, but he has shone indoors before—his first big final was at the Paris Masters—and he could prove very dangerous indeed for whoever survives the mouth-watering opener between Tommy Haas and Fernando Verdasco.