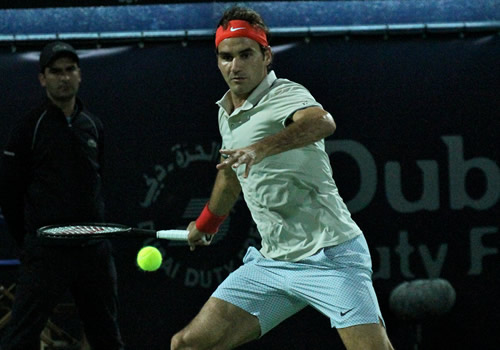 On a day in the Dubai schedules where all kinds of round-figured statistics were up for grabs, one was immediately put out of reach by illness.

Novak Djokovic was bidding for his 550th match-win in his quarter-final against Mikhail Youzhny, but the Russian was forced to withdraw with viral infection. The defending champion was into the semis without lifting his racket.

Before the question of whether Roger Federer would reach his own ground-breaking figure—40 match-wins in Dubai—the enthusiastic fans watched crowd-pleaser Jo-Wilfried Tsonga attempting, but failing, to win his 200th hard-court match against a Tomas Berdych aiming to continue his unbroken run of wins to a neat 10, and his season’s tally to 15.

Earlier, Philipp Kohlschreiber scored his 300th match-win by beating wild card Malek Jaziri—though he professed not to know. Now it was Federer’s turn, playing the late match for the first time this tournament.

He was facing his second Czech in a row, this time the No49-ranked Lukas Rosol. Before this week, Rosol had fallen in the first round in five of his six tournaments with his only match-win coming in Sydney when he defeated Joao Sousa.

But he beat the No8 seed this week to reach the quarters, and his 2013 season was the 28-year-old’s best to date, reaching No33 last May and winning his maiden title. But his biggest claim to fame came the year before, when he beat Rafael Nadal in spectacular style in the second round of Wimbledon.

He has the height, power and self-belief to be very dangerous, as Federer recognised ahead of their first ever meeting:

“No rhythm, heavy hitting, big serving, taking huge cuts at the ball from the baseline on my serve. That’s kind of what I see coming my way. I really remember his match vividly when he played Nadal at Wimbledon. I was watching it, like, I just couldn’t believe it, how he was serving at the end and how he was just running around and doing his thing.”

And perhaps fellow Czech Radek Stepanek, who led Federer 2-0 in the final set in the second round, could give him a few tips on how to disrupt the Federer flow.

Certainly the first couple of games suggested that he could because, just as last night, Federer was broken in his first service game, and could not convert a break point in Rosol’s six-minute opening service game. But then Federer turned on the style, broke to love, held to love, and went on to build a run of 11 straight points for three more break points at 0-40. Rosol pulled him back to deuce but lost the next two points for another break.

Indeed Rosol would win only three more point in the remaining three games and Federer served out the set, 6-2.

There was another eerie repeat both of the first set and of Federer’s previous match—at least temporarily.

He failed to convert a break chance in the first game and then faced break point himself with a double fault. But tonight’s Federer looked a more confident animal—and a more assertive, attacking one—than last night’s, and he served his way to a strong hold.

Rosol began to look stressed and pressured as Federer countered some strong drives to his backhand and out-served the big Czech with angle and line-hitting placement.

There were, though, a couple of stunning rallies that had the Centre Court on their feet and Mexican waves fluttering around the arena at every change of ends.

One rally in particular, with Federer again attacking the net, drew a brilliant lob from Rosol, but Federer chased it down, turned and swept an angled forehand winner past the net-bound Czech.

The match was only 49 minutes old but Rosol, despite his losing position, entered into the spirit of things, chasing lobs, trying drops and simply smiling away another Federer winner.

Rosol did hold one more game but this was Federer’s match with minute to spare before an hour was up, 6-2. And if that was not enough to whet Dubai’s tennis appetite, it set up a tasty semi-final showdown with defending champion Novak Djokovic.

It will be their 32nd meeting, with Djokovic trailing by one but having won their last three matches. And with the chance of equalling Federer’s record five Dubai titles just over the horizon, there’s just a little bit extra to play for.