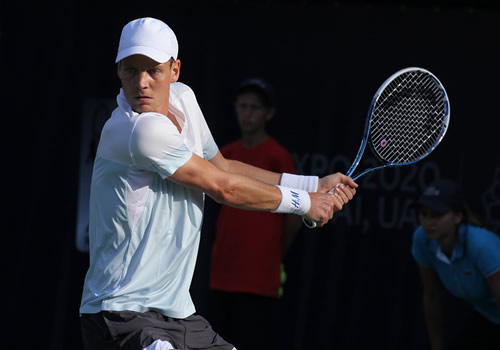 It’s quarter-final day at the Dubai Duty Free championships and, with perfect timing, the temperature decided to celebrate with a rise to 30C. Perfect conditions, then for playing tennis, especially for the contest between the big-hitting big men in the big clash of the day.

The meeting between No3 seed Tomas Berdych and No5 seed Tsonga jumped off the page as soon as the draw was made, their first clash for more than a year.

At that stage, the winner seemed to be heading towards a semi clash with Juan Martin del Potro before even contemplating a final face-off with the defending champion, Novak Djokovic—a tough draw indeed. But following the Argentine’s early departure with wrist injury, the path was made just a little easier.

No doubt the wild card Tunisian would agree with that assessment: His opponent, No7 seed Philipp Kohlschreiber may not, having made his own easy progress to the quarters—and it would, indeed, be the German who advanced to the semis from the bottom quarter.

Tsonga and Berdych had met six times before, the Czech leading 4-2 and with wins in both their outdoor hard-court matches. However, it was the Frenchman who won their last match in the final of Marseille last year, and four of their six meetings had gone to a deciding set.

Both former top-five players, both 28 years old, the current four-place disparity in their rankings could perhaps be put down to Tsonga’s absence with injury from June to September last season. Certainly he had found some form since his return: the title in Metz, semis at the Shanghai Masters and Vienna, and the final of Marseille last week.

Indeed if anyone was concerned about his dash from Europe’s indoor courts to a hot Dubai, it was soon banished. He played quite stunning tennis in his opener against Victor Hanescu, and then enjoyed a rest after Nikolay Davydenko withdrew from Round 2. He looked in perfect shape to claim his 200th hard-court win.

But Berdych has been riding a wave of confidence, not least because his game suits the fast courts here in Dubai. He beat Federer in the semis last year before going down to Djokovic in the final. This year, he arrived with the Rotterdam title and on a seven-match winning run. Since Doha, he had won 13 of his last 14 matches with his only defeat coming from Stan Wawrinka in the Australian Open semis. He dispatched Sergiy Stakhovsky, 6-2, 6-1, in only 57 minutes.

Here, then, was a match-up to relish but despite, or perhaps because of, the high expectations, it did not reach the heights—certainly not with any consistency—that many anticipated.

Tsonga came under pressure early, and looked as though the break from tennis yesterday had worked against him. He did fend off a break point in his first service game and both then served solidly through to 4-4, with the Frenchman reaching 210kph with his serve and Berdych 215.

But it was the Czech’s return of serve at 5-4 up the helped make the decisive break—two outright winners contributing to a tally of 10 in the set. Helped further by a double fault from Tsonga, Berdych took the lead, 6-4 in little more than half an hour.

In fact, it was again Tsonga who faced break points first in the second game, one from a shocker of a drop-shot attempt. But his next drop-shot worked and after three deuces, he held.

The game that Berdych recalled was the fifth. He went 0-30 down and then a wild forehand took him to 15-40. He saved the day with two cracking winners, only to face two more—one courtesy of a double fault—but Tsonga continued to be inconsistent and let Berdych off the hook for a hold.

Tsonga yet again came under pressure, surviving a break point with two big aces, and turned the tables on Berdych. Once more, the Czech double faulted to face a break point, once more he held, and when offered the chance to break Tsonga at 4-3, he did not make another mistake. Berdych serves out the match, 6-3 after almost an hour’s more play.

So the big No3 seed’s campaign to reach two consecutive finals here continues, and he does look in confident and impressive form. He should be buoyed up, too, by the head-to-head he has over Kohlschreiber, 7-1 in the Czech’s favour, though he would not admit it:

“I have seen Philipp play here and he’s playing really well. He’s playing very aggressive, very confident too and he’s always a tough opponent to play…I will need to refocus, really be prepared and start with my good game tomorrow.”

He was not wrong about the quality of the German’s game. Kohlschreiber admitted to ambitions to reach the top 10 before he hangs up his racket, and he is playing as well at 30 as he ever has. And for a man of only 5ft 10in, his serving is very good: He won 26 of his 28 first service points against Jaziri.

Even so, Kohlschreiber faces a mountain of a task—and a man—if he’s to reach his first ATP 500 final and win No301.