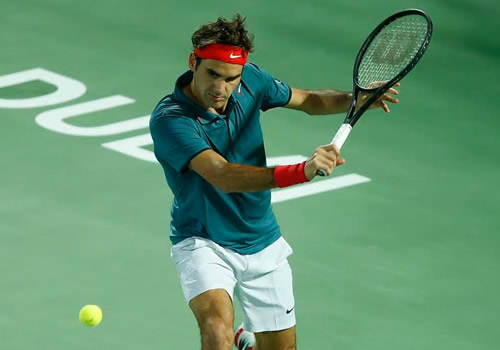 Fourth seed Roger Federer seemed to be taking things in his stride—a quick and attacking stride, too—in a one-hour, 6-1, 6-4 defeat of a hapless Benjamin Becker on the opening night of the Dubai Duty Free Championships.

Already with five titles and two finals to his name in the place that is his second home—and his training camp—Federer glided to his 38th win for just five losses here.

He opened the match with a volley winner, and that set the tone for the match. He not only attacked the net on his own serve but on the second delivery of his opponent’s, too, and if Becker had the temerity to leave a ball short, Federer attacked mid-point as well.

One point, in the seventh game of the second set, summed up the contrasting skill and fortune. It had everything: mistimed volleys, drops, lobs and a hot-dog from the chasing Swiss. It was so memorable that he could recount it ball-by-ball:

“The two shots I had before [the hot dog], the dig I had on the volley, I didn’t think I was going to make that. And then the second one was just a reflex. I thought he was going to the forehand, went to the backhand. I got it over somehow and then I thought that was maybe going to win and then he got to it quite comfortably, and he had to hit the lob because I was so close to the net.

“Then because he was coming in already, I thought maybe he was going to be pretty close to the net so let me try the lob instead of just the hit I usually play. It worked perfectly, so I’m happy I didn’t miss it wide and, even better, that he got it back—so he created even more to it. Yeah, it is rare for me to win that point with the lob in the circumstance. I know I can hit it, but it’s so rare to get that opportunity to line it up… It was exciting and the fans enjoyed it, which is almost as important as winning the point!”

The point was impressive: The detail of Federer recall just as much.

Having indeed won the point, he smiled, raised his hand in apology, and Becker hung his head in disbelief. The crowd? They erupted, and the dozens of red and white flags jumped for joy.

It proved to be the game that broke Becker’s back, and despite a valiant effort by the German at 3-5 down to earn his only break point of the match, Federer served out the match in straights sets, just as he had in their previous three contests.

Eighth seed Dimitry Tursunov, the first seed lined up for Federer in this quarter, was the first man to advance to the second round, also in just over the hour. He beat qualifier Lukas Lacko 7-5, 6-1, without being broken.

In a field packed with over-30s, the 31-year-old Russian rose last year from 125 to 29, having put assorted injuries behind him.

“I don’t think it was a beautiful match in terms of shot making, especially the first set. It’s hard to complain when you win, but I think there are quite a few things that I could have done better. But, given the circumstances, I would rather play bad and win than play great and lose. It gives me another chance to play better than today. I’m going to be Mr Positive today.”

Two more 30-year-olds, Andreas Seppi and Florian Mayer, clashed swords in what was always going to be a close contest, ranked as they were at 31 and 30 respectively.

It was Mayer who started the stronger, in what has already been a good season for the unpredictable talent from Germany. With wins over Andy Murray in Doha and both Mikhail Youzhny and Jerzy Janowicz in Australia, plus helping Germany to the Davis Cup quarters, Mayer had shown greater consistency of late, but Italian Seppi came back from a set down and 1-4 down in the third set to beat him, 4-6, 6-1, 7-5, in just under two hours.

He was delighted to get only his second win of the season under his belt:

“I just tried to keep fighting. I didn’t have so many matches under my belt this year, so I just tried to stay in the match and he gave me some chances to come back. For sure it was an important win for me.”

Seppi will next play another multi-talented German who is also closely matched in the rankings. Philipp Kohlschreiber, the No8 seed, is ranked 26 and hesitated only briefly in the second set on his way to beating Thiemo de Bakker, again in around an hour, 6-3, 6-3.

The rising Spaniard, Roberto Bautista Agut, beat qualifier Adrian Ungur, 6-1, 6-3—yes, in around an hour—to set up the unenviable task of a probable second-round match against defending champion Novak Djokovic.

The top seed, though, did not make it past the first round in the doubles competition here. Playing with his hitting partner, Carlos Gomez-Herrera, they lost, 7-5, 1-6, 10-5, to Tomasz Bednarek and Lukas Dlouhy.

However, the No2 singles seed, Juan Martin del Potro, joined Radek Stepanek to defeat the No4 doubles seeds, Ivan Dodig and Mikhail Youzhny, 6-3 7-5.