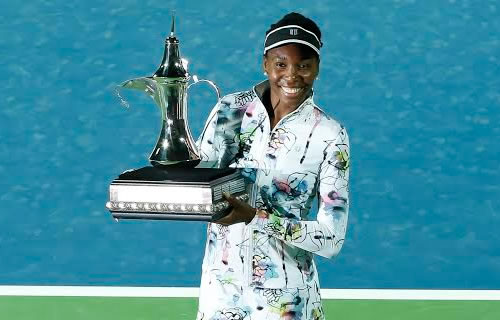 As the women’s draw in Dubai narrowed towards the sharp end of the week, it began to look increasingly as though the tournament was heading to a dream final between two greats of the game: Serena Williams and her sister Venus.

It would have been the 25th meeting between the women whose total age amounts to 65 and tally of Grand Slams amounts to 24, but the young Frenchwoman Alize Cornet, aged 24 and ranked 26, had other ideas.

Cornet, who only received a place in the main draw when Svetlana Kuznetsova withdrew with injury, received another bonus in the first round against the in-form Simona Halep when the No7 seed retired with an ankle injury. Cornet grapped her opportunity with both hands to beat Kirsten Flipkens and Carla Suarez Navarro without dropping a set.

But the biggest shock came in the semis over the No1-ranked Serena, the top seed at this prestigious Premier event in one of the few tournaments she had failed to win.

Cornet looked confident right from the start, and broke Williams’ serve to lead 5-4 after the top seed had led 40-15. The French woman served out the first set, broke twice in the second, and served to love to take game, set and match, 6-4, 6-4. It halted Williams in the semis here for the third time in her three visits.

Cornet, who had lost all three of her previous matches against Serena, was naturally thrilled by her achievement—the first woman in 18 months to beat the mighty No1 in straight sets: “It’s definitely the biggest win of my career… I’m really, really happy and proud of myself!”

Now, though, Cornet had another big hurdle. Venus, twice a champion in Dubai, kept her date in the final—her second of the year so far—by beating the 2011 Dubai winner, Caroline Wozniacki, 6-3 6-2. Venus also held a 3-0 record over Cornet, and was about to play her 73rd career final, but this time, the Frenchwoman was the superior seed.

Williams, who was hit in 2011 by the debilitating Sjögren’s Syndrome, slipped outside the top 100 and subsequently struggled to play a full schedule as she edged her way back up the rankings. Now ranked 44, she had clearly found her form again, beating the likes of Ana Ivanovic, Flavia Pennetta and Wozniacki without dropping a set.

Could Cornet become only the eighth player during the Williams’ sisters’ 15 years of dominance to beat both women in the same tournament?

Well it looked, in the early stages, as though she could, as Cornet scored the first break in the third game. However, that would prove to be her only break of the match, for as Williams warmed up—and it was a very cool evening that had her wrapped in towels at the change of ends—she hit her serves harder, passed Cornet down the line and attacked the net with increasing success. The games remained long and competitive, but Williams broke again and was soon 5-2 ahead after a strong hold.

Cornet called her coach, but was unable to find the solution to Williams’ blistering returns of serve, especially when the French woman missed her first delivery. She did fight off two break points to hold, but the American served out the set, 6-3.

The first game of the second set became vitally important, as Cornet served through 11 minutes, five deuces, and finally gave up the break. Williams was now attacking with greater purpose than ever, chasing into the net at every opportunity. Sometimes she got burned, but often she did not, and it forced more errors from an increasingly frustrated Cornet.

Williams serve was now hitting the 180kph mark, and one of many backhand winners down the line brought up another break point. She took it for a 3-0 lead and, when stamina may in the past have been a concern, she also fought off three break-back points in the fourth game.

And so the match continued apace, with Williams taking 11 of the last 12 games to take the second set in just over half an hour, 6-0.

This was her first title since October 2012 and her first Premier title since she won on this very court in 2010, marking a 15-match winning streak in Dubai to earn a hat-trick of titles in the desert. No wonder she could not stop beaming.

She was asked whether she was playing as well as at her peak, but she was quick to stress that “Just to be able to play here and compete is wonderful.”

But she also admitted that she has aimed for the older model Venus “to be a better, smarter Venus.” She certainly came to the net in a determined way, played some great backhand angles, and hit her big serve consistently and with variety.

For fans of the elder Williams sister, then, this was more than encouraging: It was a pleasure.