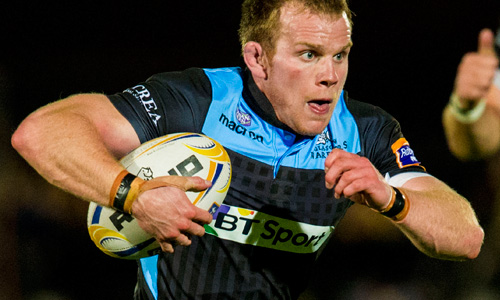 Chris Fusaro has signed a new two-year deal with Glasgow Warriors, keeping him at Scotstoun Stadium until May 2016.

Fusaro, 24, made his international debut against England at Murrayfield in Saturday’s Calcutta Cup defeat and has already made 64 appearances for the Pro12 side.

“Since joining the Warriors I’ve never looked back and I’m delighted to be staying at the club for another two years, Fusaro said.

“I’m enjoying working with the coaches and my game has really developed over the past few years.

“I was so proud to make my Scotland debut on Saturday and although I was very disappointed with the result, I will never forget the experience.

“I believe the best place for me to be is in Glasgow, as it’s a club with a very bright future with success on the horizon.”

Fusaro, a product of Bell Baxter High School and Howe of Fife, was delighted to make his senior international debut at openside on Saturday in place of captain Kelly Brown having represented Scotland at age-grade levels and Scotland A .

Warriors head coach Gregor Townsend added: “It’s fantastic news for the club that Chris has decided to stay and continue his development in Glasgow.

“Chris has had a very good season, which has led to him winning his first cap on Saturday. He put in a really courageous performance for Scotland.

“He displays leadership qualities every day at the club and has been our captain on a couple of occasions this season.

“Chris epitomises what you want to see in a rugby player and is very well respected by everyone in the group.”

Fusaro is the latest in a line of Warriors to commit their future to the west of Scotland club with a new deal, following in the footsteps of Mark Bennett, Alex Dunbar, Tim Swinson, Henry Pyrgos, and Dougie Hall.