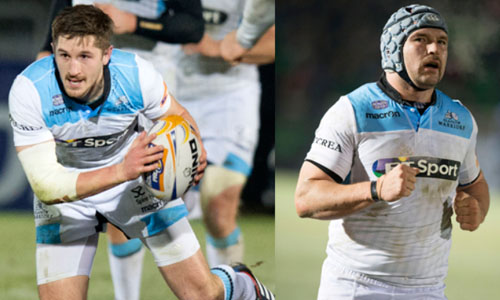 Henry Pyrgos and Dougie Hall have agreed new Glasgow Warriors deals to remain at Scotstoun Stadium until at least May 2015.

The Scotland internationals are the latest Warriors to agree new deals as the club and the Scottish Rugby Union continue to maintain a strong player base in the west of the country.

Henry is a top-class scrum-half

Gregor Townsend, Warriors head coach, said: “It’s fantastic news that both Henry and Dougie are staying at the club.

“Henry is a top-class scrum-half who works hard to improve his game and Dougie is a very experienced hooker who has performed consistently well for the club over the past couple of seasons.

“Henry’s kicking game is up there with the best out of any scrum-half in the northern hemisphere and he’s developed a running side to his play which I can see becoming a real strength for him.

“He’s a very good rugby player and makes good decisions to bring others into the game. I believe that Henry will continue to improve in our environment, so it’s great that’s he has signed up for another season.”

After missing out on a call-up to Scotland’s 2014 Six Nations squad, Pyrgos opened the scoring for Scotland A against England Saxons on his home ground on Friday and kicked a penalty in the 16-16 draw.

The 24-year-old had made 55 league appearances in Pro12 for the Warriors and played 15 times in the Heineken Cup, making his Scotland debut off the bench against New Zealand in 2012.

Pyrgos said: “I am absolutely thrilled to have agreed this new deal with the club.

“I love playing for Glasgow and I’m looking forward to staying here and competing for the number nine jersey.

“This season I’ve been up against two excellent scrum-halves, but that has made me work even harder to try and get into the team, which has really helped improve my game.

“I know that as long as I keep working hard I’ll get opportunities to play and I want to continue to learn from the players and coaches I’m working with every day at Scotstoun.”

At 33, hooker Hall is one of the Warriors most experienced having made 122 appearances for the Warriors and 42 caps for Scotland and was delighted to have extended his stay with the club he joined in 2007.

“It was an easy decision to stay at the club and I’m happy to have agreed this new deal,” Hall said.

“I’m really enjoying my rugby just now and I’m part of a very good squad, which is probably the strongest it’s been in the time I’ve been at the club.

“Now that this has been agreed I can continue to focus on my rugby and look forward to an important second half of the season.”

Townsend believes that Hall still has a part to play at the Warriors both on and off the field.

“Dougie has been at the club for seven years and is one of the most experienced members of our squad,” he added.

“Not only is he an important player for us on the pitch but off it he provides guidance to our younger players.

“We’re delighted to keep Dougie at Scotstoun and he will continue to play a big role at the club.”

Keen to avoid a player exodus that has engulfed Welsh rugby and also threatens the success of provincial rugby in Ireland, the Warriors have secured the long-term futures of several key players.

The latest contract announcements follow quickly after lock Tim Swinson and centres Alex Dunbar and Mark Bennett all signed three-year deals in the last three months to remain with the west of Scotland club until May 2017.

Young outside-half Finn Russell was also rewarded for his performances with Ayr and the Warriors to sign his first professional contract to keep him in the west of Scotland until 2016.