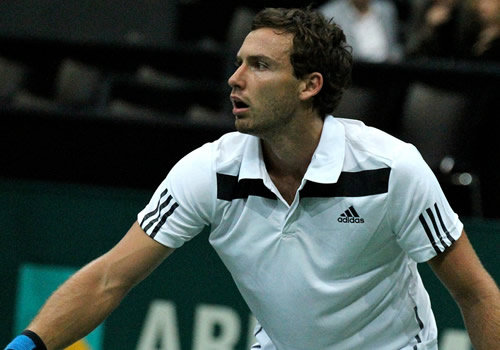 In the final indoor hard event until the autumn, the vast talent and headline-grabbing personality of Ernests Gulbis won his fifth title in Marseille by beating the second seed and defending champion, Jo-Wilfried Tsonga, 7-6(5), 6-4. He had already beaten the top seed, Richard Gasquet, in the semis.

The win came on the back of a semi-final run at the Rotterdam 500, and took him into the top 20 for the first time in his career, to No18.

This time last year, the Latvian stood at No109, but he revealed that his target is much higher: “My long-term goal in tennis isn’t to be top 20. It’s to be No1. Anything less than that wouldn’t make me fully satisfied. I don’t want to get to 30 years old, look back on my career and say I didn’t make something of it. Everybody’s looking for satisfaction in life, and my joy and happiness is based on my tennis career.”

It is a significant change of attitude for Gulbis, who has never been one to hide his light under a bushel, but has also freely admitted that he never enjoyed the training regimes that underpin the modern game. In Rotterdam, however, he revealed that he now recognised there was no short-cut to success: There had to be hard work away from competition.

Everybody’s looking for satisfaction in life, and my joy and happiness is based on my tennis career

“I think [the top players] feel threatened by my game, because they know if I serve well and I’m aggressive, then it’s tough to play against me. I don’t feel I’m in the same league as the [top four] yet, I need to prove it. Game-wise, I think that I can be.”

Across the Atlantic on the hot outdoor courts of Florida, another tall 25-year-old was building on Rotterdam success with his 18th match-win of the year. Marin Cilic defeated former champion Kevin Anderson for the Delray Beach title, his second trophy in three weeks in a tough three-hour final, 7-6(6), 6-7(7), 6-4. The match marked the longest of both Cilic and Anderson’s careers.

The Croat won the Zagreb title, backed it up with the Rotterdam final, and now rises to No25 in the rankings from 47 just four months ago. It also took Cilic past Ivan Ljubicic to second on the list of Croatian title holders, though still well behind his new coach, Goran Ivanisevic.

And so to the final outdoor clay event of the Golden Swing, the brand-new 500 in Brazil, the Rio Open. And if it’s clay, it has to be Rafael Nadal. Sure enough, he claimed his 62nd title via his 800th professional match by beating Alexandr Dolgopolov, 6-3, 7-6(3).

It took the remarkable Spaniard up to joint seventh with Guillermo Vilas in Open Era title leaders and just two behind fifth-placed Bjorn Borg and Pete Sampras.

“Always when you win a title, it’s special,” said Nadal, who celebrated his triumph with Brazilian legends Ronaldo and Gustavo Kuerten. “The first edition of a big tournament like Rio, it’s a very important city in the world, and after coming back from injury, it always makes the victory a little more special.”

The 27-year-old Nadal is undefeated on Brazilian soil. He also won titles in Costa do Sauipe in 2005 and in Sao Paulo last year. Just as impressive, he has a 16-1 record in 2014, with his only loss coming in the Australian Open final against Stanislas Wawrinka. The Spaniard opened the season with victory at the in Doha.

However, Nadal’s route to the final proved far from easy. He saved two match points to overcome countryman Pablo Andujar in a gripping semi-final, eventually winning 2-6, 6-3, 7-6(10).

The other big story of the tournament concerned the losing finalist. Dolgopolov was contesting his first final since October 2012, and on that occasion, he finished runner-up in Valencia to David Ferrer. But here, Dolgopolov beat the No2 seed and No4 in the world, along with two more top-20 players, Fabio Fognini and Nicolas Almagro.

Having reached No13 in the world in 2012, the Ukrainian was down as 59 by the end of last season, but his run on South America’s clay has given him a 16-place boost to No38.

So one more talented 25-year-old back on an upward trajectory, it seems—each via very different paths.