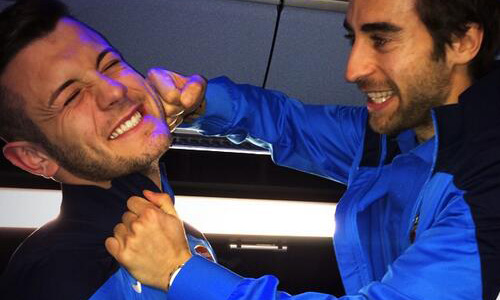 Jack Wilshere has taken to Twitter to rubbish reports that he had “bust up” with fellow Arsenal midfielder Mathieu Flamini at training on Friday.

The Daily Mail and Metro carried pictures of Flamini and Wilshere in an apparent heated discussion at Arsenal’s London Colney facility ahead of their clash against Sunderland.

However, the 22-year-old England midfielder took his Twitter page to pour cold water on the reports, laughing off the suggestion that he would take on “nutter” Flamini.

Just read I had a 'bust up' in training today! That's news to me! Anyway….who would mess with Flamini? #Nutter

Flam was not happy when I walked on the bus tonight! Sorry mate I promise to never disagree with you again!! #Angry pic.twitter.com/a5fSDmzGZz

Flamini was involved in a tense exchange of words with Arsenal club-record signing Mesut Ozil during their 2-0 loss to Bayern Munich in the Champions League mid-week.

However, the France international denied a “rift” with Ozil when asked about his German team-mate following their last-16 first-leg loss to the holders.

“When you’re a journalist or you’re a fan seeing it from the outside, it’s difficult to interpret it,” Flamini told Arsenal’s website. “But Mesut is one of my closest team-mates and we were on the pitch.

“It was not about arguing it was just about communication. Mesut is a winner, I’m a winner; we were both fighting because we just wanted to give everything to the team to make sure we defended properly.

“It was about communication, but at the end of the day it proves to everyone that we really wanted to win and we’re winners. It’s important, as you want a team with character, not a team who doesn’t react.”