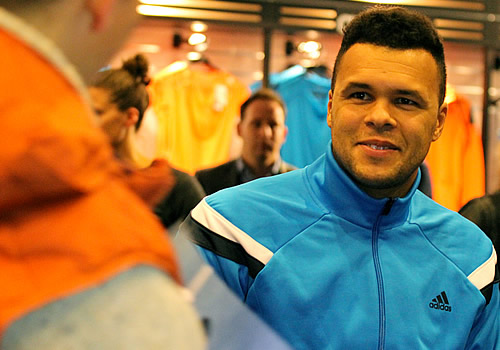 There are only 32 men in the main singles draw of the ABN AMRO championships in Rotterdam this week, and no fewer than eight of them are French.

It’s become a common theme, with France always a major presence across not just the ATP tour but in Grand Slams and, most recently, the Davis Cup. This powerhouse of tennis currently boasts five top-30 players, two of them in the top-10: No9 Richard Gasquet and No10 Jo-Wilfried Tsonga.

Ten days ago these two took their nation, in very speedy fashion, to the quarter-finals of the Davis Cup. Last week, Gasquet featured in the Montpellier final with French colleague, Gael Monfils.

The tall, charismatic Monfils won the title to become one of the biggest risers in the rankings come Monday morning, up seven places to No23. Not bad for a man who was outside the top 100 just a year ago as, dogged by injuries, he slid out of the top 10 where he had featured in 2011: He had been without a title ever since.

It was this time last year, ranked 108, that he met Juan Martin del Potro, the eventual Rotterdam champion, for his first and only time—and as luck would have it, they have been drawn together this year, and again in the first round. Del Potro, though, was less optimistic about the outcome:

“It will be a fun match to watch. He’s playing great, he’s one player you want far away in the draw. He’s unseeded, but it will be a good challenge for me. If I do well it will be great for me.”

But before either Monfils or Gasquet play their first matches in Rotterdam, one of the most popular men on the tour, Tsonga, was already through to the second round, though it was a close thing. Indeed after losing the first set to the unpredictable talent of Florian Mayer, it must have felt like dejà vu for Tsonga.

At the same time and same place last year, on the Ahoy’s huge centre court, Tsonga made a shock first-round exit to Dutch player Igor Sijsling, in what proved to be a year of swinging fortunes.

He had played one of his finest Grand Slam matches to open 2013, losing to Roger Federer in five outstanding sets in the quarters. But after a successful Davis Cup rubber against Israel came that Rotterdam loss. Then the title in Marseille was followed by another first-round loss in Dubai.

He put together a sequence of decent, if not earth-shattering, results through Indian Wells, Miami, Monte Carlo and Madrid, unable to beat anyone in the top 15. Then another first-round loss in Rome was pushed to one side as he stormed past Federer in straight sets at Roland Garros to reach the semis. He backed that up with close three-setter against Andy Murray at Queen’s, but the site of one of his best Grand Slams, Wimbledon, brought bad news. A second-round loss by retirement, and he was sideline with knee injury until the indoor hard courts of Metz in September.

It was, again, mixed fortunes for the rest of the season, with semi finishes at Shanghai and Vienna but a first-round exit in Paris to close his season. He failed to qualify for the World Tour Finals for the first time in three years, despite maintaining his top-10 ranking unbroken for 30 months.

And so, returning 12 months after that shock Rotterdam loss, Tsonga was starting to look something like his old self again. He came unstuck against Federer in Australia but was a convincing winner against Lleyton Hewitt in the Davis Cup. And this time in Rotterdam, he fought back against the dangerous Mayer in style.

He admitted: “A first round is always difficult and Mayer is a strong opponent. I’m glad I won at this competitive tournament where I’ve had good results in the past.”

And sure enough Rotterdam has proven Tsonga’s prowess on indoor courts: Seven of his 10 titles have come in this environment, as well as five of his other eight finals. One of those finals was in Rotterdam in 2011 when he lost to Robin Soderling, and he came up against Rafael Nadal in the quarters of his previous visit in 2009.

Tsonga’s next opponent is Marin Cilic, who arrived here in very strong form with the Zagreb title—and the Croat took precisely one hour to beat Lukas Rosol, 6-2, 6-2, in the first round.

So it will not be an easy match for Tsonga, but the owner of the most winning smile and exuberant match-win celebration will, judging by his pulling power around the tournament, have the Rotterdam crowd in his corner. Tuesday was no ‘off day’ for the Frenchman, and his signing session in the Ahoy Plaza area, followed by a spray-paint session with youngsters with Babolat—makers of the Tsonga racket—were both packed events.

Safe to say, the smiling face of the popular Tsonga now graces the mobiles of many more fans.

As a footnote, the French campaign in the Netherlands was diminished just a little by the withdrawal of Gilles Simon with back injury. He is replaced by German lucky loser, Daniel Brands.