Del Potro faces tough Rotterdam defence, but ‘everything is possible’ 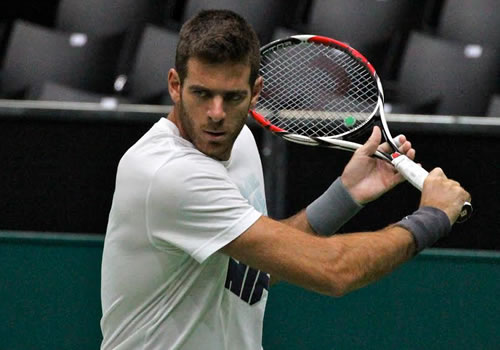 It may be blowing a gale outside, and the surrounding waterways may be full to overflowing with water, but it takes a lot more than inclement weather to put a dampener on the all-green environment of Rotterdam’s Ahoy stadium.

And if the field-like courts do not summon a feeling of early spring then the fresh flowers that decorate every corner certainly do.

With such a welcome—and the not insignificant 500 points on offer to the winner—the ABN AMRO Rotterdam always draws a strong field, not least from its sibling indoor tournaments of Europe. No fewer than seven of the 32-strong main draw are French, including Montpellier’s finalists, world No9 Richard Gasquet and former world No7 Gael Monfils. And hot-foot from the Zagreb final is world No12 Tommy Haas.

But the star of the show—at least until the day before the draw was made—is defending champion Juan Martin del Potro, who has enjoyed huge success when it comes to the tour’s two indoor 500 events. As well as winning here last year, he was the losing finalist to Roger Federer in 2012, and beat his Swiss friend in the last two Basel finals.

Del Potro went on to lose to Federer in the closing tournaments of 2013, both of them indoors: Paris and the ATP World Tour finals. So with no Federer in Rotterdam this year, del Potro became the favourite in every sense of the word.

The usual big presence of the No7-ranked Tomas Berdych would, as always, pose a threat—and his indoor prowess was on show in three Davis Cup match-wins last week—but, as second seed, he could not dent the Argentine before the final.

But then the landscape changed. With just a couple of days to spare, Andy Murray, ranked No6 after missing the entire post-US Open season with back surgery, took a late wild card and the No2 seeding.

And that threw Berdych into del Potro’s half, along with Haas and the charismatic Grigor Dimitrov fresh from a rousing first Grand Slam quarter-final in Australia and a career-high ranking inside the top 20.

Not that Dimitrov was a shoo-in: Should he come through Dmitry Tursunov in the first round, he was drawn to face the unpredictable talent of Denis Istomin or Ernests Gulbis.

As if all that was not enough to concern del Potro, the top-seeded Argentine first drew Monfils—a man ranked outside the top 100 this time last year after numerous injury problems, but now at No 30. As if to emphasise that this most flamboyant of players was hitting peak form, Monfils captured the Montpellier title against defending champion Gasquet just weeks after finishing runner-up to Rafael Nadal in Doha.

Del Potro and Monfils, by a quirk of the draw, had met only once before, in this very tournament in the same opening round last year. On that occasion, it was a straight-forward victory for the Argentine, as their relative ranking dictated. But this year could be very different, as del Potro readily admitted ahead of the event:

“Same round as last year… will be a fun match to watch! He’s playing great, he’s one player you want far away in the draw. He’s unseeded, but it will be a good challenge for me. If I do well it will be great for me. If not, my goals don’t change for the season.”

And those goals could be affected by an injury concern, for ahead of Rotterdam, there were mixed messages about the Argentine’s form.

He began his Rotterdam title defence back at the career-high No4 he last enjoyed in the aftermath of winning the US Open almost four years ago. What’s more, he began 2014 by winning the Sydney title, but then he made a shock second-round exit in Melbourne. It transpired that he was carrying a wrist problem and he by-passed the Davis Cup to take medical treatment.

This was, not surprisingly, the primary topic of conversation as he faced the media this weekend.

“My wrist is improving day by day. I visited my doctor in the United States, and he’s confident it will recover very fast. That’s why I came to play this tournament.

“I am having physio every single day… Warm up before practice and again do work with physio after practice. And everything is checked with my doctor, who’s talking with me every day.”

Was it, I asked, a difficult decision to come so far to play this tournament?

“I came because I like this tournament and I’m defending champion. I feel it’s a special tournament and I believe in my game. I’m very confident of improving [during] the rest of the week. I don’t feel any big pain at the moment and my doctor gave me big confidence to come: I think I made a good decision to come.”

Yet it became clear that he is not yet back to his fighting best:

“I lost muscle, I lost energy in my left arm, because I was 20 days without practising tennis, without gym, and it’s just three to four days ago that I started to practise again. I need to work a couple of [more] days to feel confidence.”

It’s a modest response, of a kind entirely typical of this quietly-spoken man. Yet even in a year during which he admitted he often played with pain—“I’ve played many tournaments with this pain… last year at Indian Wells, Cincinnati, playing with a lot of slice… this year trying to find a different treatment, to play all season and fix the injury”—he is focused and optimistic. He talks like the champion he has been, like a man who is capable regularly of beating the best. He did, after all, score victories last year over Andy Murray and Novak Djokovic at Indian Wells, Federer in Basel and Nadal in Shanghai but, he reminded his audience:

“It’s not easy if your goals are very high. I want to be in top positions for the rest of year… I hope to stay in the top five for many weeks and aim for No3. [Stan] Wawrinka won the Australian Open, which means it’s hard to beat him in rankings: Nadal, Djokovic, Murray, they are all still there… but looking to the end of the season, if I do well in some Grand Slams, I could maybe get to closer to top guys.”

It was, it seemed, worth pointing out that he broke the Nadal-Federer Grand Slam stranglehold at the US Open at such a young age that he is still the youngest man in the top 10. He would only grudgingly accept the fact as a positive:

“To be honest, I’m not feeling really young on the tour. Dimitrov, Raonic, Tomic, Harrison—they are young players. [But] you also have Haas at 35 playing at top-10 level. It’s amazing. So if you see him, and Wawrinka win a Grand Slam, you have to be glad and positive because some things can change. Everything is possible.”

And that may well prove to be the case again for this understated yet iron-willed young man. The odds, it seems, have been stacked against him in Rotterdam, but don’t let that fool you.