Laureus Awards 2014: Rafael Nadal is nominated for sportsman of the year and comeback of the year 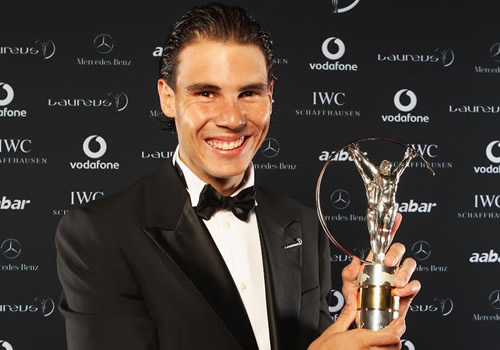 Amid a sparkling field of sporting stars up for Laureus World Sports Awards this year there are no fewer than four nominations for tennis.

Top of the pile is Rafael Nadal, who gets two nods in different categories and is a strong contender to add to the pair of Laureus Awards he already owns.

Nadal returned to tennis last February after a seven-month absence with a knee injury to produce one of his finest years. Having missed the Australian Open, he went on to win the French Open for a record eighth time, confirming his position as probably the greatest clay court player in history. He also won the US Open, his 13th Grand Slam, regained his No1 world ranking and won five ATP Masters 1000 tournaments. He is nominated in both the Sportsman of the Year and the Comeback of the Year categories.

Serena Williams is a contender for her fourth award in the Sportswoman of the Year section.

The 32-year-old continued to go from strength to strength after an outstanding 2012 that saw her win Wimbledon, the US Open and Olympic gold. In 2013, she won the French and the US Open to take her career total of Grand Slam singles victories to 17, just one behind Chris Evert and Martina Navratilova. She regained the world No1 ranking in February, which she still holds, and won eight other tournaments, including the WTA Championship in Istanbul.

The last tennis nomination comes in the Team of the Year category with twins Bob and Mike Bryan.

At Wimbledon, the Bryans achieved an historic Golden Slam by winning their 15th Grand Slam title, their third at Wimbledon, to become the first doubles pair to hold all four Major titles and the Olympic gold medal at the same time. The 35-year-old twins have won more professional games, more matches, more tournaments and more Grand Slams than any other pairing. Last April, they recorded their 800th win.

The competition is, as always, extremely tough. Nadal is up against three-time winner Usain Bolt, Formula One world champion Sebastian Vettel, who is short-listed for the fifth time, and Tiger Woods, who won in 2000.

Williams is nominated for the second year in a row along with Missy Franklin and Shelly-Ann Fraser-Pryce.

The Bryans face perhaps the biggest competition against Bayern Munich, winners of the Champions League, Bundesliga and German Cup, New Zealand’s All Blacks, the first national rugby team to achieve a 100 percent record in the professional era, the Brazil Men’s Football Team, winners of the Confederations Cup, and Red Bull, winners of a fourth straight Formula 1 Constructors’ World Championship.