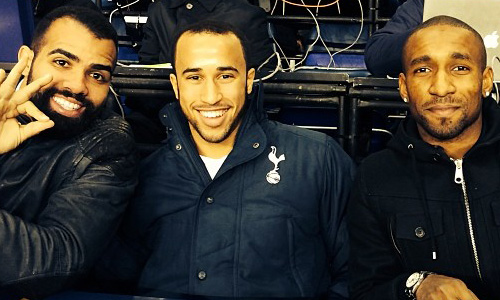 Emmanuel Adebayor scored twice as Tottenham Hotspur came from behind to beat Dnipro 3-1 and secure their spot in the Europa League last 16.

However, Welsh outfit Swansea City didn’t manage to move into the next round after late goals from Napoli duo Gonzalo Higuain and Gokhan Inler sealed a 3-1 win in Naples.

Here is the best of the action from Twitter from the the professionals in chronological order to a busy night in Europe’s second tier.

Former Wales international Iwan Roberts ‏(@iwanwroberts) is sickened for Garry Monk’s plucky side: “Gutted for @SwansOfficial fantastic performance and Wilfred Bony should have won them the game what a chance he had.”

Ex-Arsenal striker and Swansea-born John Hartson ‏(@JohnHartson10) hopes the Swans can secure their top-flight status after being knocked out of Europe: “Great effort from Swansea tonight. Cement their premier league status now..Have a safe trip home to all the travelling fans. Be safe.”

Former Spurs chairman Lord Sugar ‏(@Lord_Sugar) isn’t lost in the irony of Juande Ramos winning at White Hart Lane: “Well at least one can say that Ramos won a game at WHL, he didn’t win any when he was manager.”

13 minutes later, and Sugar ‏(@Lord_Sugar) should be a happy Spurs fan: “3 goals in 13 mins still not breaking the record against Luton.”

Liverpool legend John Aldridge ‏(@Realaldo474) likes the look of Yevhen Konoplyanka: “We really missed out on that Konoplianka (before the police come after me) I don’t know if that’s spelt correct. Top player!!”

Tottenham right-back Kyle Walker (‏@kylewalker2) hails a departing Spurs legend: “What a legend @IAmJermainDefoe #COYS all the best mate from the bottom of my heart u will be missed around the place.”

Finally, Tottenham midfielder Aaron Lennon (‏@Aaron7Lennon) says Jermain Defoe will be missed: “Great come back tonight by the lads to put us through,and also a special send off for a great man @IAmJermainDefoe will be missed #Legend”