Novak Djokovic is in positive mood as he prepares to defend his Dubai Duty Free title. Marianne Bevis reports 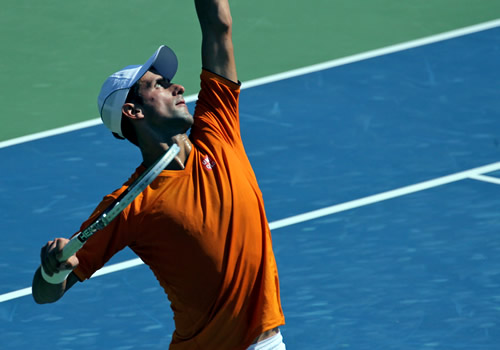 The four-time and defending champion in Dubai this week quickly entered into the spirit of the tournament that, as usual, has drawn one of the finest fields of players to assemble outside a Masters or Major. But that has always been his way.

Last year, when he was also defending the Dubai Duty Free title, he took to the water to swim with turtles. This year, he took to the air in the private wind tunnel of the Crown Prince of Dubai—and the pictures were splashed across every paper in the region and well beyond.

Djokovic was ready with the wit as soon as he settled into the white leather armchair to face his inquisitors on ‘Round-table Sunday’—though not before he gate-crashed the media session of fellow seed Tomas Berdych: “Excuse me, another question here—could I ask you about your new line?” A reference, presumably, to the big Czech’s clothing sponsor, H&M.

And it was his photo-shoot in the wind-tunnel that prompted the opening comic routine, first about himself—“I still have a family to form, and to save my life”—and then at the expense of new coach Boris Becker:

“It’s a lot of fun, but let me tell you, it isn’t easy! Boris kept saying he was like a fish out of water… He was not very comfortable out there. For some reason, he was sinking all the time (laughs). He was going down more than he was going up—you can understand that. For us lighter guys, like me and my brother, it was better to stay up in the air.”

But this became, as the conversation unfolded, a more serious, more reflective Djokovic, a man who, unusually for the patriotic Serb, bypassed the Davis Cup after his quarter-final loss at the Australian Open in order to rest and recuperate. So had the break worked? Did he now feel back to full strength?

“I do. I actually took quite a bit of time off, more than four weeks since my last official match. I’ve played only five matches this year. It’s going to be challenging for me to go out on the court in a few days and try to find a way to play in the match situation because I haven’t had many matches.

“So I’ve practised a lot for three weeks, and that’s why you have to be very extra careful, because it’s totally different when you get on a court and play an official match in front of thousands of people.

“So I’ve been trying to play many points in the last few days against all the players in the tournament, and been feeling progress little by little—and hopefully I can have a good tournament here.”

Listening to him, it was worth remembering that Djokovic ended 2013 more strongly than any player in the world, even though he was bitterly disappointed to lose the end-of-year No1 ranking to the resurgent Rafael Nadal. The Serb, though, won seven titles, as well as 74 of his 83 matches last year, and was unbeaten after his loss to Nadal at the US Open final.

And he also started 2014 well, winning the prestigious exhibition event in Abu Dhabi and sailing through his first four matches in Melbourne with ease. That he lost to eventual champion Stan Wawrinka in a repeat of their five-set marathons in both Australia and the US Open last year, was hardly cause for disappointment, and he admitted as much.

“It was a tough loss for me but overall it was not disappointing. I lost an incredibly close match. I try to take the positive side. I played a lot of matches at the end of the 2013 season and I’m still using supplies of confidence from that period.”

But the long, hard road to the ATP World Tour Finals title, via victories in Beijing, Shanghai and Paris—as well as four Davis Cup matches—had perhaps taken as much of a mental toll as a physical one, judging from his February break.

“I’ve worked a lot in the last three weeks. [But] since the Australian Open I’ve done a lot of things. Gone to places I haven’t seen for a long time—since my childhood. Reconnected again with a period of growing up, spent time with the family.

“[It has] given me a lot of food for my soul, and positive life energy that I can hopefully transfer to the court.”

He referred again to the mental stresses of the tour—and maybe the lingering disappointment at how close he came to beating Nadal in the semis of the French Open, the one Grand Slam Djokovic has yet to win—but this time in the context of recruiting Becker to his team.

“That’s one of the reasons Boris is here, because of the big matches and in Grand Slams [where] I’ve felt like I’ve dropped two or three titles in the last few years that I could have won in big matches. Felt there’s that mental edge that’s been lacking a little bit.”

Sure enough, in talking of the Becker contribution, there was no talk of technical change, and why would a player as successful as Djokovic continues to be want to tamper with the fundamentals? And a quick look at the man he took on to help take a further step in his development was famed in his heyday for a muscular, power-packed, serve-and-volley brand of tennis.

“I discussed it with my team last year, during the Asian swing and [long-standing coach] Marian Vajda was actually the one who suggested it. Since he’s travelled so many years as a player and a coach, he wanted to take some time with his family. We considered many different names and Boris fitted in our vision, most closely to what I wanted.

“It was several months of discussions. As a head coach, he committed to travel a lot of weeks to many tournaments, which is going to bring me, I hope, not just positive results but things to learn to build on.

“We are not significantly changing anything in my game. The biggest part where he can contribute is the mental approach, figuring out match situations, details on the positioning on the court. Nothing in my technique: You’re not going to see me playing with my left hand, no one-handed backhands, anything like that (smiling).”

That reference was, perhaps, a nod to Nadal and Roger Federer, and he was eager to stress that he is both rivals and friends with both men:

“I think we have a very pleasant and fair relationship off the court and on the court. We have tons of respect for each other that we always show, and that sends a very good message about our sport.”

It certainly does: All three handle themselves admirably well in one of the most stressful, one-on-one sports in the world—and as tennis’s biggest stars and ambassadors.

In Dubai, Djokovic finds himself in the same half as Federer, and with fellow top-10 players Berdych, Juan Martin del Potro and Jo-Wilfried Tsonga in the other half. He is defending a big title in his first action since failing to defend his Australian title, and his new player-coach relationship is firmly in the spotlight.

So he has reason to be serious, but in typical Djokovic fashion, he departed the media bull-pit as he arrived—with a broad grin and a throw-away… “And talk nice about me!”

Chances are, everyone will do just that.