Novak Djokovic, Tomas Berdych and Roger Federer all secure their places in the quarter-finals in Dubai 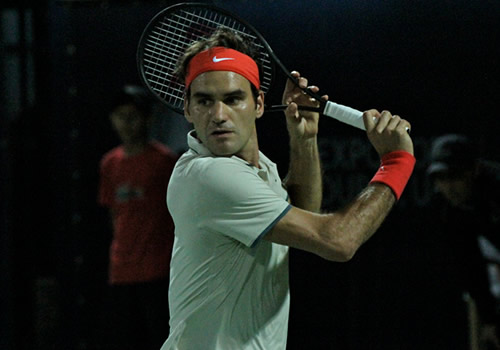 Although the loss of the second seed Juan Martin del Potro in his first match of the Dubai Duty Free Championships had been both a surprise and a disappointment, there were few concerns for the other three ‘big boys’ in the draw.

All three—Novak Djokovic, Tomas Berdych and Roger Federer—had made easy progress through their opening matches, none of them dropping more than seven games nor taking much more than an hour to go about their business.

By Round 2, the tests should have grown a little harder, but all three of these men had brought impressive records with them to Dubai.

Berdych was playing the hugely talented but equally unpredictable Sergiy Stakhovsky. Ranked 88 perhaps, but few will forget the tennis that the Ukrainian played to beat Federer at Wimbledon last year.

Berdych, though, is riding a wave of confidence, not least because his big game suits the hot fast courts here in Dubai. He beat Federer in the semis last year before going down to Djokovic in the final. This year, he also arrived with the Rotterdam title and on a seven-match winning run. Since Doha, he had won 12 of his last 13 matches with his only defeat coming from Stan Wawrinka in the Australian Open semis.

As expected, Berdych made minimal fuss of Stakhovsky, advancing to the quarters, 6-2, 6-1, in only 57 minutes. He will next play fifth seed Jo-Wilfried Tsonga, who advanced without hitting a ball after his opponent, Nikolay Davydenko, withdrew due to a rib injury.

Djokovic’s record in Dubai is truly impressive, and when he took to court against Roberto Bautista Agut, the defending and four-time champion was in pursuit of a 30th match-win here. In eight consecutive years of competition in Dubai, the No2 ranked Serb has never fallen short of the quarters… and he did not do so this time either.

In a near repeat of Berdych’s match, Djokovic cruised to a 6-1, 6-3 victory in 55 minutes. Should he go on to beat Mikhail Youzhny, he will notch up the 550th victory of his career—and earn the eagerly-hoped-for semi-final clash with Federer.

Djokovic, though, must have been particularly pleased to get his match done and dusted so quickly, for it had started much later than expected due to the feisty contest put up by veteran Czech, the 35-year-old Radek Stepanek against Federer.

The Swiss is a huge favourite here in Dubai, where he has a second home and training base. Playing in the tournament for an 11th time, he has won the title five times and been a finalist twice more. And his appearance was all the more welcome for a return to form after a difficult year of injury and ranking slides in 2013. With a new racket, new coach, and again an expectant father, his zest for tennis was looking undiminished, and his results were heading back in the right direction: Final in Brisbane, semis in Australia, wins in Davis Cup.

What’s more, he had beaten Stepanek 12 times in 14 meetings, and was unbeaten against the Czech since early 2008.

Federer quickly regrouped to break straight back, and did so twice more to take the set, 6-2.

But again, Stepanek broke in the opening game, attacking Federer, playing solidly from the back of the court, slicing wide to the Swiss backhand and happily taking volley chances. During the meat of the set, with both playing some fine all-court tennis of touch and variety, this became a delight to watch, and all the more so for the pro-Federer crowd when he broke at the key moment, just as Stepanek served for the set. He did it in style, racing in for a smash winner—but that was not the end of this gripping story.

A fall from Stepanek—he mopped up the court and then wiped his brow with the same towel—preluded a love hold that took the set to a tie-break.

It began with a controversial point—two bad line calls, both against Stepanek. He pretended to shoot the two offenders with his racket but kept his calm, went 5-2 up, only for Federer to double fault. The Czech levelled the match, 7-4—and promptly broke the opening Federer serve for the third consecutive time with some glorious shot-making.

But it was short-lived. Although Stepanek fought through four deuces, he could not hold off a down-the-line backhand winner from a now rampant Federer and they were all square.

There was one final twist after Federer had made two more breaks. Serving for the set, the Swiss had two match points, double faulted twice and handed a break back. He compensated with a last match-winning break, 6-3—but it had taken him over two hours.

He admitted that he had been thrown at being broken at the start of all three sets, and that he was perhaps over-analysing what he should do:

“I’m trying to analyse everything, what I’m doing right and what I’m doing wrong, and I’m playing shots at the same time. There is a lot of thinking going on out there. It’s not very helpful, but I do think I started to understand what I was doing wrong, which made me maybe play a little bit tentative from the baseline, made me not make enough shots, why I wasn’t playing as aggressive as I wanted to, couldn’t find the right balance between offence and defence, no transition games at all. It was almost a bit too late for everything, but I kind of hung around and, you know, I took the positives out of the match.

“Radek did a good job of putting the pressure on me and mixing it up. From that standpoint, it was a really difficult match. I’m very pleased to come through.”

He next plays another Czech, the big-hitting, shot-making Lukas Rosol. Federer was asked what he expected: “No rhythm, heavy hitting, big serving, taking huge cuts at the ball from the baseline on my serve. That’s kind of what I see coming my way.” Memories, perhaps, of Rosol’s outstanding display in beating Rafael Nadal at Wimbledon in 2012.

In the meantime, Federer clocked up his 39th match-win in Dubai. No40 should provide some extra incentive late tomorrow evening.