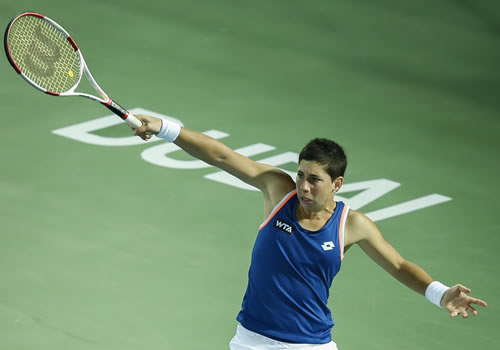 Kvitova dominated the opening set against Suarez Navarro, led 4-2 in the second and served for the match at 5-4 in the third. But her persistent opponent refused to concede and eventually claimed a well-earned victory in a tense tiebreak.

“When I was leading in the second set, I lost very badly my serve, and I think that from that moment I was like a little bit mentally down and I was trying to come back,” said Kvitova.

Elsewhere, Venus Williams gained revenge for her defeat earlier this year in the Auckland final, overwhelming Ana Ivanovic 6-2 6-1 and then also taking to the court again, teaming with sister Serena but losing 6-4 4-6 10-4 to Australian Open finalists Ekaterina Makarova and Elena Vesnina.

Radwanska rarely looked comfortable against Pennetta, who although having to qualify in Dubai is an experienced opponent who reached the semi-finals at the 2013 US Open. After building a 4-1 lead the former champion’s challenge fell away and Pennetta was able to claim a comfortable victory.

“The ball was really flying,” said Radwanska. “I didn’t really feel the ball today at all. I think she was using the wind much, much better than I did. The conditions for me are tough. When I don’t feel the ball, it’s not good.”

Pennetta had lost her last three matches against Radwanska, and knew she had to be patient if she was to have the chance of victory.

“Sometimes when you play with a player like Agnieszka it’s not easy because the ball, it always come back,” said Pennetta. “You have the feeling like you cannot win any points because it’s like a wall, completely. So you’re starting to be a little bit frustrated.”

Ivanovic was beaten in under an hour, and admitted that having played late the previous evening might have influenced her performance. But so did how well Venus played.

“It’s hard to get much sleep when you finish that late and that kind of match, too,” said Ivanovic. “But she started really firing, you know, from the first moment on. It was just really hard. I tried to be aggressive and to put her under pressure, but I was just making way too many errors today.”

Wozniacki was stretched by Beck, who ousted Australian Open semi-finalist Eugenie Bouchard in the qualifying rounds and then upset former US Open champion Samantha Stosur in the first round. The former world No1 struggled to close out the first set after leading 5-1 and failed to serve out the match at 5-3, but broke serve in the final game to claim a welcome victory.

“You know, she’s a fighter,” said Wozniacki. “She gets a lot of balls back. She mixes the rhythm, the pace of the ball, and I just started to not really hit through but just place the ball, and all of a sudden she started to get some points back.”