RaboDirect Pro12: Glasgow Warriors sign 24-year-old Carlin Isles on a deal until May 2015 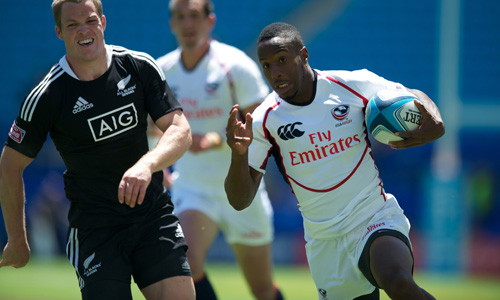 Glasgow Warriors have confirmed the signing of American Sevens star Carlin Isles until May 2015.

The move, subject to a visa and medical, will see the 24-year-old given the chance to prove himself on the 15-a-side stage after lighting up the IRB Sevens World Series with his explosive pace in the USA side.

I hope to score tries for the Warriors, but I also want to continue to try and help grow the game and encourage young players to take up rugby

A former youth track star, Isles is timed over 100 metres time at a wind-assisted 10.13 seconds, with much being made about a time that would have seen the Ohio-born speedster qualify for the semi-finals at the London 2012 Olympics.

“I can’t wait to fly over to Glasgow and join up with my new team-mates,” Isles told Glasgow Warriors’s website.

“Everything has happened so quickly for me over the last couple of years and I’m just happy to be playing rugby and getting the opportunity to play at the highest level.

“I hope to score tries for the Warriors, but I also want to continue to try and help grow the game and encourage young players to take up rugby.

“It’s very exciting to be moving to the 15-a-side game. It’s a lot different to 7s but I want to work hard and do everything I can to succeed.

“I’m up for the challenge, I’ve been doing a lot of challenges in my life so this is just another obstacle and I’m ready to take it on.

“I’ve been in contact with [Warriors head coach] Gregor [Townsend] a few times and knowing he really wants me and sees something in me means a lot and was a big factor in deciding to join the club.

“It would be nice to stay in Glasgow for a long time, but all my focus is on the next few months and the challenge ahead.”

Isles, who has already played on his new home ground with the USA last year, has scored 27 tries in 14 rounds of the IRB Sevens World Series and Rugby World Cup last year, but made headlines in the US after he was signed to a futures contract with the Detroit Lions American football franchise before committing his future to rugby union.

The headline grabbing move could backfire with Isles lacking any experience of playing high-intensity 15-a-side rugby, but Warriors coach Townsend believes the American can become part of the club’s plans.

“This is a major coup for the club and a very exciting prospect,” Townsend added.

“Carlin is an exceptionally gifted athlete, who has picked up the game of rugby in a very short period of time and has had a huge impact on the sevens circuit over the last couple of years.

“He is really eager to learn and develop as a winger in the 15-a-side game. With his lightning pace and evasion skills, he already has an excellent base to challenge for a starting place until the end of the season.

“I can’t wait to get him over here to learn the 15s game, but there may also be an opportunity for him to play at the Melrose 7s in April, after we were invited to play in the tournament for the first time.”

Isles’ arrival in the coming weeks will see him link up with USA Sevens colleague Folau Niua, who joined the club earlier this month, and should ease the Warriors’ shortage of wing options with DTH van der Merwe and Sean Maitland out for the rest of the season.