"I feel I’m in as good shape as I’ve been for a year at least now, which is very encouraging," says Roger Federer in Dubai 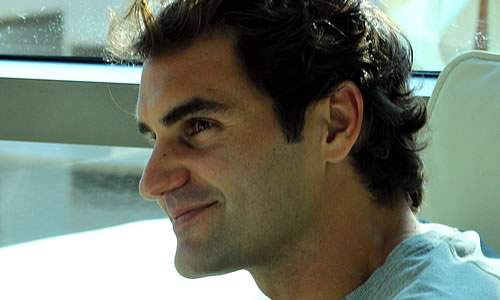 For more than a decade, Roger Federer has spent so much time in Dubai and in front of the media that his obligatory media duties ahead of this year’s Dubai Duty Free Championships must feel like a home from home.

Dubai has long been a training base for the five-time champion of perhaps the most prestigious 500 tournament on the tour, and the Swiss will open his campaign for a sixth title—in the feature match, of course—tomorrow evening.

Over the years, only one man has come close to matching Federer’s Dubai achievements: Defending champion Novak Djokovic took the title between 2009 and 2011 as well as last year. Even so, ever since Federer lost in his debut in the shimmering city that strides into the Persian Gulf, he has made this place his own.

Last year’s exit to Tomas Berdych after holding three match points was certainly not par for the Federer course in Dubai, but then 2013 was an out-of-the-ordinary season once he injured his back in Indian Wells. A long-planned training block ahead of the clay season was disrupted, Wimbledon saw a second-round loss, and Hamburg and Gstaad brought more surprising defeats, while at the US Open, he suffered a first-ever loss to Tommy Robredo.

I feel I’m in as good shape as I’ve been for a year at least now, which is very encouraging

Federer ended the year with just one title, from Halle, but with improving results and a belief that hard work and passion for the game would return him to full fitness by this spring. Certainly his off-season proved just how strong his will to win continued to be.

He pulled the plug on a South American exhibition tour, took just a short break in the Maldives after a semi finish at the World Tour Finals, and headed to Dubai to make up for that lost training block in 2013. Indeed, as he told the Swiss-French newspaper Le Matin, he and his family gave up Christmas in Switzerland to continue his hot-weather training in Dubai.

And news continued to flow from the Federer camp in what was turning into a very busy off-season.

He confirmed to the Swiss-German Basler Zeitung that he intended to play in Australia with the bigger racket he had trialled the summer before. He announced the launch of a new athlete management firm with his agent Tony Godsick, that he would play in Brisbane for the first time, that he would also play a fund-raiser to mark the 10th anniversary of his Foundation—and that he and wife Mirka were expecting another child.

And there was one final revelation: En route to Brisbane, he announced that childhood hero Stefan Edberg was joining his coaching team.

With hindsight, of course, this was all handled with the deft touch of a man in complete control of his affairs and with an innate sense PR timing—and it all began to bear fruit. In Brisbane, he made the final, in Australia he beat Jo-Wilfried Tsonga and Andy Murray back to back before falling to Rafael Nadal.

He then stepped up to Davis Cup duties—a last-minute, on-the-fly decision, as he revealed in typically relaxed and confident fashion at a media round-table against the drop-dead backdrop of white leather armchairs and the Dubai skyline.

“I knew I was probably not going to play [Davis Cup] but when I finished my match with Rafa, I got back to the hotel, talked to the team, said ‘I feel zero tired, I’m not injured, I’d definitely consider playing if you want me to. Let me get back to Switzerland, see if I still feel the same way 24 hours later.’ I did, so I said, ‘Let’s figure out when we go.’”

Then he talked about that racket change.

“The good thing about the racket is that I’m not thinking about it, which for me is key. Playing point for point, match for match, and not wondering is it going to be OK. It feels like [I’ve used it] longer than a few months… Brisbane and Melbourne gave me confirmation that it’s been a good switch, it’s been an easy one, no drama, very happy.”

There was also good news on the fitness front.

“I feel I’m in as good shape as I’ve been for a year at least now, which is very encouraging. I feel like my good tennis is around the corner. I’ve said that quite a few times, but now I feel it’s really the case. I wake up with zero pain, I’m excited playing tournaments… And what was really encouraging was my off-season. I trained really hard here in Dubai, for a month. That was key, to know my body was going to handle that stress level. And that makes me confident for the year.”

As well as his winter training block in Dubai, Federer has been here preparing for the tournament for over a week, too: “It’s nice to also play the tournament here: Almost feel like there’s no adjustment really needed when I come back… so I hope its going to pay off.”

But it’s clear where the Federer heart is: It’s in Switzerland, with Swiss mates and Swiss family. For whether talking of Nadal’s chances of equalling his 17 Grand Slams—“yes, absolutely”—or of Davis Cup or of getting over his loss in Melbourne—“I got over it fairly quickly”—Federer’s answers are peppered with references to home, to his children and to his friends.

Any disappointment after Australia was dissipated with his Swiss friends:

“I had a great week with Stan [Wawrinka], Seve [Luthi] and the boys in Serbia. That gets you over any disappointment, and then I was just happy to be home with my kids and my family, enjoying quality time.”

Federer, it transpired, was trying to follow Wawrinka’s progress in the Australian final as he flew to Switzerland.

“I didn’t see a point… but I [arrived home,] got messages saying this and that, he lost a set and Rafa’s injured, so I’m like, he’s won, he’s lost? I needed to wait until I got from the plane to the baggage, and then I found out he won, and I thought it was just perfect… I was unbelievably happy for him.

“I’ve seen him improve, struggle, play dream tennis, and then make mistakes again and learn again. I’ve seen him do it all, side by side, winning the Olympics with him, and see him take it all in his stride.

“To hear what he had to say about it all, it was a great pleasure to spend that time with him right after his victory.”

But combine Switzerland and his children, and you feel Federer could talk until the cows come home.

“In 2012, there was a lot of tennis going on and I really started to miss Switzerland after a while, so I’m happy I was home again, especially with the kids, you know going for hikes and skiing: It’s nice stuff to do.”

“It’s fun for them to come to the site sometimes. They play a little bit of tennis themselves now, so to relate a little bit to what I’m doing is not a bad thing. I like when they come to the courts, and I’m warming up when they’re running around. And when I come back, they help me take my tape off and whatever: It’s really cute.

“They understand the difference between training and matches, understand that I’m a tennis player, they see me on TV, and I get recognised—people want pictures with me. But other than that, I try not to talk about it too much, and spend quality time when I’m with them, educate them in the right way—and enjoy their childhood.”

The Federers’ twin daughters are now coming up to school age and will, he has said before, be educated in his homeland. Soon, too, there will be another baby to consider, and while he talked with confidence of it “being easy” this time, it is almost certainly set to become more complicated.

For all the talk of rackets and coaches, tournaments and titles, Dubai and the rest of the globe-trotting tennis tour, one senses that life on the road will surely only become a little tougher for this very Swiss father of soon-to-be-three.