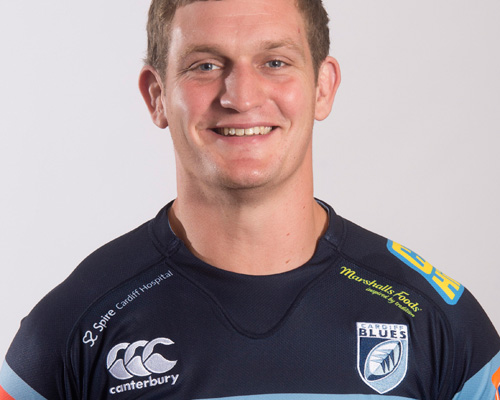 Rory Watts-Jones has committed his future to the Cardiff Blues after agreeing a new contract with the Welsh region.

The 25-year-old, who played for Championship side Plymouth Albion while on an environmental construction surveying degree at the city’s university, has impressed since his switch to the Blues in 2012 and rewarded with a two-year extension.

“I’m very grateful to have the contract offer from Blues and accept it. Phil [Davies] is a loyal man and he has shown his great faith in me; I want to repay that with my performances,” said Watt-Jones.

“This season I feel I have stepped up and looked to take my chance in the first team. I’m a local boy from the region and there is nowhere else I would want to play my rugby.

“Obviously I want to play every single week and you have to really push yourself here. The talent in the back row is clear and while we are very close and get on well the competition is fierce.

“You want to be pushing each other and striving to get better. I like that environment and feel it can only make you a better player.”

Watts-Jones has made 25 appearances for the region in all competitions, being deployed on both sides of the scrum when called upon.

He joins fellow young forwards Ellis Jenkins and Kristian Dacey who have also pledged their futures to the Blues in the last month with young full-back Dan Fish also signing a new deal this week.

“I’m delighted that Rory has re-signed for the Blues. He came into the senior set-up at Blues two years ago and has really taken his opportunity,” Blues director of rugby Phil Davies said.

“Over the last few years he has progressed and has represented us in the RaboDirect PRO12, LV=Cup and Heineken Cup. He has been particularly impressive in Europe and was outstanding in the two games with Glasgow this season.

“I’m really pleased that he has committed to a long-term deal and I’m sure he will only get better in the years to come and continue to be a key part of our squad.”