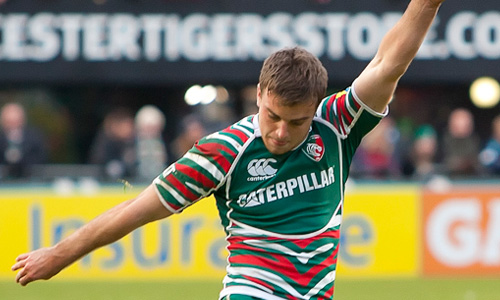 George Ford could make his senior England debut at Twickenham on Saturday after he was included in the match-day squad.

After an impressive start to his career at Bath Rugby after winning the Premiership with Leicester Tigers last season, the 20-year-old outside-half is expected to act as understudy to Owen Farrell after making the final 23 for the first time in the 2014 Six Nations championship.

“We feel that the time is right to include George Ford in the match-day squad,” said England head coach Stuart Lancaster.

“A full three weeks of training as allowed him the chance to really understand the way we develop our game and this time is crucial in order for him to feel confident and ready in a key decision-making and leadership position.

“We have successfully integrated and included many young players over the last two years and George is the next exciting talent to make his mark in the senior squad and we are a looking forward to see him develop over the next few months.”

Ford’s team-mate David Wilson is also included in the match-day squad for the first time this year after recovering from a calf injury, with the tight-head prop expected to share front row duties with Sale Sharks’ Henry Thomas.

Leicester’s Dan Cole was ruled out of the tournament with a bulging disc in his neck causing a trapped nerve.

Wilson’s last appearance for England came in the autumn internationals against Argentina and the 28 year-old will win his 32nd cap against Ireland.

Among the players to return to their clubs for round 15 of the Aviva Premiership this weekend are Saracens centre Brad Barritt, who again misses out along with team-mate Chris Ashton.

Lancaster added: “Brad is obviously disappointed but he is still a key member of our squad and I am sure he will get further opportunities in the future. He hasn’t had much game time since his injury and will benefit from some time with Saracens over the next two weeks.”

England’s starting XV to face Ireland will be announced on Thursday morning.