Six Nations 2014: Ireland and Wales set to renew old rivalry at The Aviva 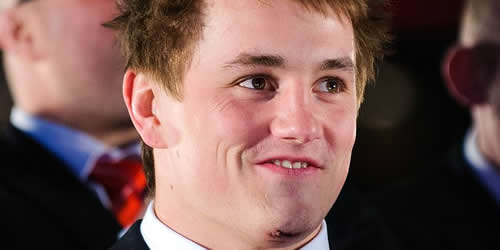 If one was to liken the relationship of Ireland and Wales to that of two pals in a televison sitcom, you could bet one of their friends would eventually stand up and say, ‘what’s happened to the pair of you? You used to be so close…’.

On Saturday the two Celtic nations will meet for the 120th time, and if previous fixtures and a particular Lions tour in between are to go, the latest installment of what has now become a fractured friendship promises to be one of the most intense in quite some time, and one in which either could emerge victorious.

In welcoming back both Paul O’Connell and Gordon D’Arcy to his starting XV following last Sunday’s disposal of a disappointing Scotland, Joe Schmidt has the comfort of naming one of his strongest possible sides given the circumstances prior to the tournament.

For Warren Gatland, who is priming himself to enter the Lansdowne boiling pot, there are three changes from last Saturday’s stumbling victory over Italy in Cardiff, the biggest being Sam Warburton restoration as captain in place of Alun-Wyn Jones, with Gethin Jenkins and Andrew Coombes also being called up, the latter as cover for the injured Luke Charteris.

Unfortunately for those hoping to stir up further tension between the camps prior to kick off, there is no room in the squad for one Jonathan Davies, the player Gatland now infamously picked over Brian O’Driscoll last July in the third Lions test.

Despite making his comeback from injury for the Scarlets last weekend, the Welsh centre is still short of match sharpness having just played 40 minutes in the last two months.

On Saturday, some eyes will focus on one man in the stand and another hoping for one last hurrah against an opposition who he has put seven tries past since the competition’s inception in 2000. Some eyes will focus, but not all.

For the eyes that want to leave this story where it belongs in the past, the lowdown on Saturday’s game couldn’t be much clearer: only one will emerge as a team still capable of achieving a Grand Slam, and with that, a far greater chance of winning the competition outright.

When Saturday comes, it can be said that both sides have a point to prove despite registering wins on the opening weekend.

At home, Ireland found it difficult to get off the mark initially, eventually managing to break down a stubborn Scotland early into the second half. Across the way in Cardiff, their opponents by no means had it their own way.

With both teams determined to only improve on their previous performance, early exchanges of play – particularly in the breakdown and the set piece – will be just that little bit more crucial as opposed to the previous weekend, and early mistakes could be crucially punished, and as Ireland’s first half in the corresponding fixtures proved, some mistakes are often hard to make up for.

Head-to-head battles on the pitch will decide the tie. Previously, a familiar trend in the fixture has occurred at the breakdown where the Welsh have managed to literally break down their opponents.

Minus Sean O’Brien, Ireland are weaker in this department, but in late bloomer Chris Henry, who is keen on picking up where he left off on Sunday, there is certainly no major mismatch here.

Elsewhere, the scrum remains just as intense. In the front row, there is room to improve from both sides as a host of Lions do battle once more.

Should Ireland manage to get into the position of being able to control the game, their half-back pairing of Conor Murray and Jonathan Sexton must also be on their game, as must the opposing Phillips and Priestland.

Based on form up until last weekend and with home advantage, it is the former that could well decide the tie, just as both team’s respective back three combinations can do the same with both team’s tending to play such expansive rugby.

The weather could just as easily play its part too. Despite Dublin experiencing relatively calm weather at the time of writing, warnings of yet more Atlantic depressions to hit the capital over the weekend have been in effect as early as Tuesday.

Should it be wet and windy, Ireland should favour their chances, considering their opponents close the Millennium roof when any such weather strikes Cardiff. But with such conditions potentially forcing the game into a scrap in the tight, Ireland will still be made to work for any potential result.