Sochi 2014: The first Russian-organised Winter Games have been a massive success online with over 10m tweets 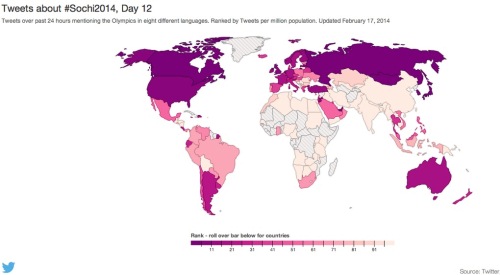 Before the athletes even took to the snow and ice the internet was reacting to the issues in Sochi, which has led to the games posting some impressive numbers for online action.

After the first two days of the games the number of visitors to the International Olympic Committee website already topped the number for the whole of Vancouver in 2010.

The stats are even more impressive when you consider the fact that Facebook said 24 million people were talking about the games during the first week of competition.

We have tripled our fans since the opening ceremony. We received millions of visitors and hundreds of millions of impressions on our platforms

“Our main job at the IOC is to bring athletes closer to fans, and fans closer to athletes, and I think we’re really doing that,” Mark Adams, IOC director of communications said.

“Fans are getting close to the athletes by sharing their photos, which are shown at the medals platform inside the Olympic Park and at other live sites around Russia.”

There have been more than ten million tweets about the games and the IOC’s YouTube channel has seen an upturn in traffic with 600,000 views per day.

Check out our interactive #photogrid of the most-shared #Sochi2014 photos on Twitter http://t.co/aJ7NjVMTfi pic.twitter.com/oTYS62oNo6

Over 900,000 fans have signed up to follow the IOC on Sina Weibo, China’s biggest social network, with 12.5 million mentions of ‘sochi2014’ in the first week of the games.

Along with countless posts on their own social media profiles around 1500 athletes have posted 40,000 updates to the IOC’s social media hub.

Domestically an estimated 20 percent of the 60 million users on VKontakte, Russia’s most popular networking site, are ‘engaging’ with the games

“It was critical for us to create a dynamic platform for our users for interactions with our fans that would allow us to bring immediacy and emotion to what we are doing. I think that we succeeded with that,” Sochi 2014 communications director Aleksandra Kosterina said.

“We have tripled our fans since the opening ceremony. We received millions of visitors and hundreds of millions of impressions on our platforms.”

Overall the official website has had five million daily visitors with over 60 million hits so far and the two IOC apps have 4.5 million downloads.