Sochi 2014: Charlie White and Meryl Davis, who have skated together for 17 years, won their and the USA's first ice dance gold 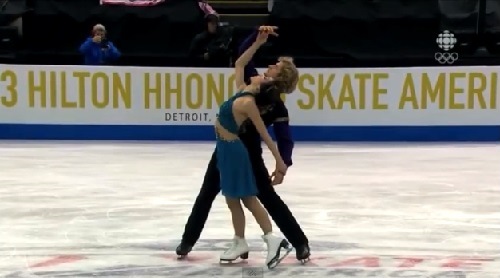 Charlie White and Meryl Davis delivered the United States its first ever gold medal in ice dance, posting a world record combined score of 195.52 to see off their rivals and training partners, Canada’s Tessa Virtue and Scott Moir.

The pair, who have skated together for 17 years, produced a free program that was virtually flawless with perfectly smooth transitions, impeccable timing and symmetry.

“We’re so excited we’re kind of in shock a little,” Davis said after the win.

“It all came together for us. I’ve never skated and visualised the performance at the same time before and tonight that’s how it felt. It felt great.”

White added: “I felt like we had done everything we could from the beginning of this competition, in practice, team event and this event.

“After 17 years of hard work to come away with a gold medal is amazing.”

Rumours of a vote-swapping conspiracy have circled in the lead up to this event, with accusations that the American and Russian judges were colluding to prevent Virtue and Moor repeating their win of the 2010 Vancouver Games.

Russian team Elena Bobrova and Nikita Katsalapov took the bronze with a ‘Black Swan’ styled routine to maintain their nation’s record of being on the ice dance podium at every Winter Olympics since the event’s introduction in 1976.