Sochi 2014: All by myself… Maze tops podium on her own in giant slalom 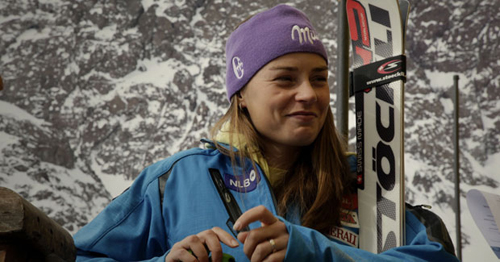 Tina Maze believes she has fulfilled her destiny by winning double gold in Sochi.

The 30-year-old went one step better than her joint gold in the downhill to claim the giant slalom title for herself and became the oldest Olympic medallist in ladies giant slalom history.

She led at the halfway stage and made no mistake with her second run to knock super-G winner Anna Fenninger of Austria down to silver and defending champion Viktoria Rebensburg of Germany into bronze.

I have dreamed about a day like this, even though it is raining. I feel a little wet but that is fine – I win the race

“It’s crazy. I was ready for this, it’s what I cam here to do,” said the Slovenian. “I feel proud. I think I will realise what I have done many years later. The rest of the season doesn’t matter.”

Maze, going out first, had the best of the conditions on the run one with heavy rain starting as she crossed the finishing line and went into run two with a huge 0.52 second advantage.

Driving snow and sleet delayed the start of the second run by nearly 15 minutes but Maze kept her calm to claim the title by 0.07 seconds from her Austrian rival.

“I have dreamed about a day like this, even though it is raining. I feel a little wet but that is fine – I win the race,” she said.

“I knew it wouldn’t be easy in giant slalom. We had two weeks of sun and I knew it couldn’t hold on. Even though it’s not perfect weather it was perfect racing. I don’t care about the rain.”

Maze was already the most decorated Slovenian Winter Olympian with two silvers in Vancouver but her double gold medal feat in Sochi will make her an even bigger star back home.