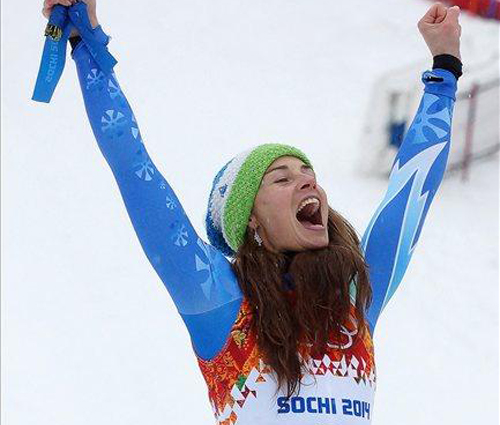 The Olympic alpine skiing events proved as hard as ever to call with the men’s events especially providing some huge shocks.

We had ten different gold medalists in ten events at the Rosa Khutor resort, albeit due to the woman’s downhill medal being shared.

The only person to win two was Slovenian Tina Maze, the undoubted star of the woman’s programme, who shared gold in the downhill and won the giant slalom outright.

I have dreamed about a day like this, even though it is raining. I feel a little wet but that is fine – I win the race

Success is nothing new to Maze whose 13-year career has seen her brake the legendary Hermann Maier’s record for points in a World Cup season, win two World Championship golds, and even top the Slovenian charts with her hit My Way My Decision.

However, this double triumph is her proudest achievement yet and has catapulted her to an even greater level of fame back home becoming Slovenia’s first ever Winter Olympic champion.

Maze clocked the same time as Switzerland’s Dominique Gisin in the downhill – the first time alpine skiers have shared the gold medal at the Olympics.

She then beat the rain to go one better in the giant slalom claiming the title for herself and becoming the oldest female Olympic medalist in the event’s history.

“I have dreamed about a day like this, even though it is raining,” said the 30-year-old. “I feel a little wet but that is fine – I win the race.

“I knew it wouldn’t be easy in giant slalom. We had two weeks of sun and I knew it couldn’t hold on. Even though it’s not perfect weather it was perfect racing. I don’t care about the rain.”

Her overall performance across all five events was the most complete by a female skier in the Olympics, beating German Maria Hoefl-Riesch’s performance in Vancouver four years ago.

Hoefl-Riesch put in another consistent showing this time around claiming gold in the combined and a silver in the super-G.

This medal tally was matched by Austrian Anna Fenninger, who won the super-G title and finished second to Maze in the giant slalom.

As for the slalom, 18-year-old American Mikaela Shiffrin put in one of the most exciting performances of the Games becoming the youngest ever woman to win the title.

She brilliantly survived a near fall halfway down her second run to take the gold ahead of Austrians Marlies Schild and Kathrin Zettel.

Up to that point the American woman had managed a solitary bronze from Julia Mancuso in the combined and looked to be struggling without the star quality of injured Lindsey Vonn.

With the emergence of Shiffrin however, they might have just found a new superstar to step into her shoes.

As for the men’s programme, all the talk going into the downhill was about the battle of the veterans – Norway’s Aksel Lund Svindal and American Bode Miller.

Svindal looked the man in form going into Sochi and Miller set the pace on the training runs but both men were overshadowed by 23-year-old newcomer Matthias Mayer.

The Austrian, competing in his first Olympics, stormed to victory in an event that has been notoriously hard to predict over the years.

There was another shock in the combined with Switzerland’s Sandro Viletta taking gold. Miller and Svindal again failed to make the podium.

Viletta seemed as surprised as anyone, saying: “This is amazing, it’s perfect, it’s more than a dream come true. It’s also a big shock. I didn’t think I would come first. I’m so happy.”

Miller finally came to the Sochi party taking bronze in the super-G to become the oldest alpine skiing medalist in Olympic history.

It’s not so much about the skiing, it’s about everything else. It’s been a hard year. I feel really lucky to have come out with a medal

The bronze was Miller’s sixth Olympic medal, a record for an American skier.

During the last year he has had to cope with the death of his brother Chelone in April as well as an ongoing custody battle for his son and he was clearly emotional after his run.

“It’s not so much about the skiing, it’s about everything else,” he said. “It’s been a hard year. I feel really lucky to have come out with a medal.

“I skied hard but it wasn’t about that – it came down to luck. I’m very fortunate. I’m just really happy to have got on the right side of the numbers.”

The upturn in American fortunes continued in the giant slalom with Ted Ligety taking the gold ahead of Frenchmen Steve Missillier and Alexis Pinturault.

Then came the final skiing gold of the Games in the men’s slalom and, true to form, this provided another shock and two more records.

Matt had only ever completed one other Olympic race finishing 34th in the combined at the Turin Games so this result was unexpected to say the least.

The bronze went to Sweden’s Henrik Kristoffersen who became the youngest man to win an Olympic skiing medal at 19.

The two medals for Austria took their alpine skiing tally to nine for the Games to top the sport’s medal table. They won three gold, four silver and two bronze, ahead of the US with five overall while Switzerland, Germany and Norway all won three medals each.

Attention now turns back to the World Cup which gets underway again next week in Norway for the men and Switzerland for the woman.

With two rounds to go Hirscher and Hoefl-Riesch lead the overall standings but all the top names have something to ski for so there’ll be no let up in intensity.

As for the Olympics, the International Ski Federation (FIS) is making a fresh push for a nations team event to be included in four years time.

The event has been part of the World Championship programme since 2005, and the FIS is looking for a mixed competition to be added to the busy schedule in South Korea.

According to FIS secretary general Sarah Lewis, NBC amongst others are keen to bolster the second week of competition with a new skiing discipline.

With NBC being the IOC’s most important rights holders, it will be no surprise if we enjoy 11 alpine events in Pyeongchang rather than the usual ten.