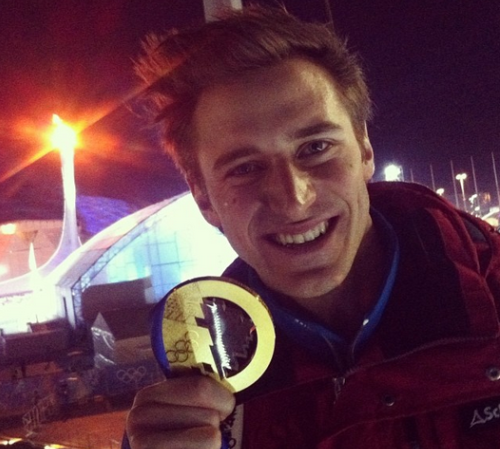 Super Sunday, Sochi’s busiest of the 16 days of competition with eight golds up for grabs, was lit up by an underdog, defending champions and the ageless Armin ‘Cannibal’ Zoeggeler.

Nobody was as surprised as the Austrian’s coach Mathias Berthold, who amusingly shared his thoughts on the youngest skier in the top 30 world rankings.

This is good for me, good for the sport, good for Italy. It is very nice, I am happy with this medal, I’ve had a good time. This is really my last Olympics

“Normally, he always does something stupid […] he’s not an experienced guy, so I don’t know what he does sometimes,” he said.

From a maiden win to a historic victory next, as Slovakian Anastasiya Kuzmina became the first woman to win two Olympic gold medals in the biathlon women’s 7.5km sprint.

She retained her Vancouver title by capitalising on shooting errors from Norwegian Tora Berger and Belarusian Darya Domracheva who had been seen as favourites prior to the event.

American Jamie Anderson won gold in the first ever Olympic slopestyle snowboarding competition, as Jenny Jones got Britain’s first ever medal on snow with her bronze.

She later revealed how she prepared in a quintessentially British manner; by watching an episode of Downton Abbey the night before the biggest day of her life.

Dario Cologna of Switzerland overcame an ankle injury that crippled his season, having only returned to competition last month after ligament surgery in Decmber.

His emotional return to full fitness saw him capture the gold in the 30km skiathlon, his biggest win to date following his 15km freestyle win in Vancouver.

The home nation won their first gold in the inaugural team figure skating event, aided by the performance of 15-year-old Julia Lipnitskaia.

Twitter was dominated with posts of her accomplished performance, as she became the second youngest figure skating gold medallist in Olympic history.

The packed crowd gave a standing ovation, as Russia did not fall outside of the top three in any discipline, winning the gold on points before the final dance had even begun.

German Felix Loch later blew his rivals out of the water to collect his second successive gold in the luge, earning a track record with his time of 3:27.526.

Italian Zoeggeler, who has spent the past 20 years devouring his luge competitors, clinched a record-breaking sixth Olympic medal as he placed third.

The 40-year-old finished on the podium at the previous five Winter Olympics and said his latest – and last exploits on the track after he confirmed he would hang up his sled – left him speechless.

“I have no words,” he said, when asked about his record.

“This is good for me, good for the sport, good for Italy. It is very nice, I am happy with this medal, I’ve had a good time. This is really my last Olympics.”

Poland secured their first Sochi gold as Kamil Stoch comprehensively blew his rivals out of the water with a sublime final jump of 103.5m, to achieve an overall score of 278.0, 12 points clear of the field.

Stoch follows fellow Pole ski-jumpers Wojciech Fortuna and Adam Malysz into the Olympic record books, which is not an easy achievement – this was Stoch’s first medal in three Winter Olympics appearances.

There was no major change to the Olympic table as Norway remain top with six medals, just ahead of the USA and the Netherlands who also have two golds each.

Great Britain’s bronze adds them to the list of fifteen nations that feature on the medal table, and it leaves them a third of the way to reaching their target of three medals at the games.