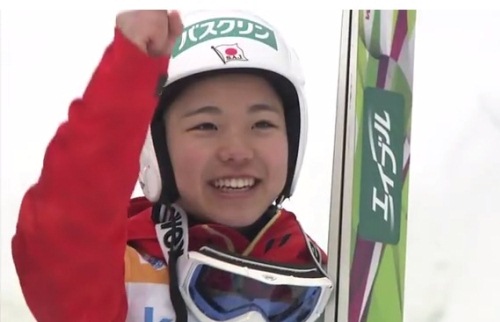 Japan’s teen sensation Sara Takanashi has set her sights on taking gold in the inaugural women’s ski jump on Tuesday.

The 17-year-old has taken ten out of 13 World Cup events this season in the absence of world champion Sarah Hendrickson of America who tore her anterior cruciate ligament in August 2013.

Hendrickson is set to jump for the first time since her injury in Sochi and in-form Takanashi has her sights set on the top step of the podium.

She’s awesome. Maybe yesterday the last round was not one of her best jumps, but every jump she does she’s pretty consistent

“For me, it’s not failure not to win the gold medal, but it is my aim,” she said after training on Sunday.

“I would like to have more time to adjust to the hill because there are none like this in Japan. I’m not really happy with my three jumps.

“I have already decided everything tactically and I’m going to stick to it.”

“Daniela is a strong athlete and someone much more experienced. She has been there [in women’s ski jumping] from the start,” Takanashi said.

Iraschko-Stolz, who married her partner Isabel last year, has played down Russia’s anti-gay stance and says she is fully focussed on her jumping.

Unlike Takanashi the 30-year-old described herself as being in love with the hill stating it was one of the ‘best hills ever’.

But Iraschko-Stolz, who beat the diminutive Japanese athlete twice in consecutive days in January, is full of praise for the youngster.

“She’s awesome. Maybe yesterday the last round was not one of her best jumps, but every jump she does she’s pretty consistent,” she said.

Men’s ski jumping has been an Olympic sport since 1924 but it has taken until 2014 for the first women’s competition to take place.

The International Olympic Committee (IOC) justified the exclusion by stating there was not sufficient depth of competition or wide enough appeal.

The sport first petitioned to be involved for the 1998 Nagano games and following a victorious court case in 2009 the IOC eventually recognised the women’s event in 2011.