Sochi 2014: US biathlete Lanny Barnes owes huge debt of gratitude to sister Tracy for forfeiting her Olympic spot so she could compete 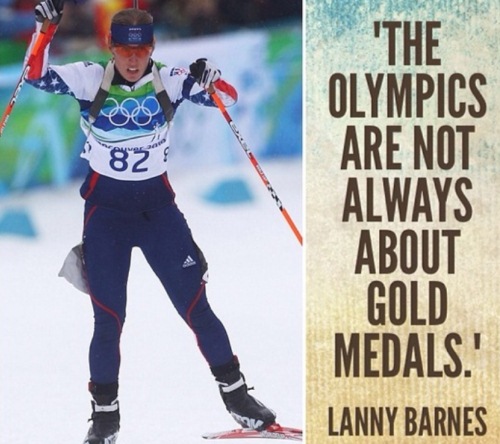 Sacrifice is deeply-rooted in the history of the Olympic Games ever since the Ancient Greeks slaughtered 100 oxen in honour of their god Zeus during the opening ceremony.

In more recent times, US 200m sprinter Shawn Crawford performed a tremendous act of sportsmanship when he surrendered his silver medal to Churandy Martina in the 2008 Beijing Games after the Netherlands Antilles athlete was disqualified for a lane infringement.

Even in these Sochi 2014 games we have seen Tongan luger Bruno Banani sacrifice his own birth name Fuahea Semi in order to fulfil the wishes of his country’s princess.

Yet Tracy Barnes’ sacrifice may be the most inspirational yet.

The US biathlete qualified for the Winter Olympics late last year, marking a spirited comeback after missing out on the 2010 Games, but forfeited her spot on the team so that her twin sister Lanny could compete.

Lanny finished 23rd in the individual 15km event in Vancouver 2010, signalling the best result for a female US biathlete in 16 years, though fell ill during the final qualification process for Sochi.

“When I saw Lanny giving everything while feeling at death’s door and when I could see how disappointed she was when she realised the dream was up for her, it made my decision easy,” Tracy told the Daily Telegraph.

Lanny initially refused to accept her sister’s selfless act but finally accepted after Tracy insisted that she would not have it any other way.

“We’re so close that we even finish each other’s sentences,” said Lanny. “But earlier after the race, I had seen her wink at me and I thought it was her way of saying: ‘Don’t worry, I’ll race for both of us.’ I was completely wrong.

“The best way I can think of honouring her is by producing the races of my life. Any medals will be hers.”

The Barnes sisters are not the only siblings to have made a name for themselves in the biathlon world however.

French brothers Martin and Simon Fourcade have enjoyed a somewhat healthy rivalry over the years, with the former claiming Olympic gold in the 12.5km pursuit on Monday afternoon.

According to their coach Siegfried Mazet, it has not always been a tale of brotherly love.

“On the team they function as if they’re not brothers, Mazet said. “It was a little hard for Simon to accept at first.

“Navigating that was difficult for four, five years but now it’s fallen into place: Martin is the world leader, Simon has accepted it.”

Sharing it with him is something incredible. My brothers are my main idols. They are my motivation

Simon finished 18th in the 12.5km event but that did not stop him revelling in his brother’s glory, who recovered from a disappointing sixth place finish in the 10km sprint on Sunday to claim France’s first medal of the 2014 Games.

“In 2010 and 2011 I was still able to compare myself to Martin,” he said. “There was a bit of rivalry going on because I was the older brother and I thought I was supposed to win.

“I cried. I’m really happy and proud for my little brother. This comes after so many years of practice. I have mixed feelings, I want to be on the podium in my brother’s place.”

Martin was in euphoric mood after overcoming a 14-second deficit to take first place but insisted that he could not have done it without his brother.

“It’s my childhood dream. I’m so happy it’s just incredible,” he said. “On the skis I was like a boxer. It was a good fight.

“Being an Olympian is something wonderful, but sharing it with him is something incredible. My brothers are my main idols. They are my motivation.”