Sochi 2014: Canada day in curling as men and women advance to finals

Sochi 2014: Canada left the curling world in awe as both their men's and women's teams comfortably made the finals 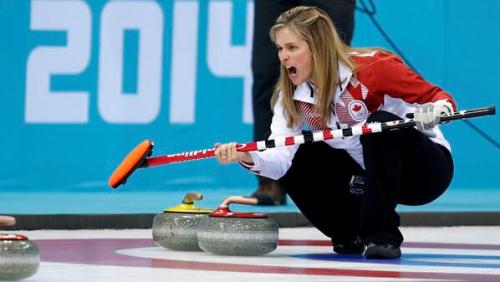 It was Canada’s day in the curling semi-finals as first the women set up a repeat of the 2010 final against Sweden and then the men moved into a gold-medal tussle with Britain.

Canada’s women remain unbeaten in the Games so far after they overcame Team GB 6-4 with skip Jennifer Jones producing a flawless display while the men saw off China 10-6.

Reigning ladies’ champions Sweden beat Switzerland 7-5 in a topsy-turvy encounter in which the lead changed hands five times while their male compatriots were undone by another last-gasp two-stone shot from GB skip David Murdoch.

The Swedish ladies, who also won in Turin in 2006, secured a decisive double in the ninth end before stealing one in the final end to secure the victory.

In semi-final one, Canada raced into a 3-0 lead after two ends and although Team GB staged a comeback, they were unable to claw back the gold-medal favourites.

Jones, in her debut Olympics, was outstanding, answering every question Eve Muirhead and her Team GB rink threw at her, producing a perfect double take-out in the eighth end when leading 5-3 to ensure the end was blanked.

Trailing 5-4 in the final end, Muirhead did everything she could to force an extra end, delivering a double take-out to leave Team GB lying three and put the pressure on Jones.

But the 39-year-old held her nerve, producing a perfect draw with the final stone to land in the centre of the house.

“It was an unbelievable game,” Jones said. “Having to make a big team shot to win, you couldn’t have scripted it any better.

“We’ve worked so hard and to be in the gold medal game is something you dream of your entire life.”

Muirhead admitted luck had not been on her side but was confident her rink would respond in the bronze-medal game against Switzerland on Thursday.

“The curling Gods were not with us,” the 23-year-old said. “That pick up in the first end was brutal and losing a two off the bat from something you can’t control against Canada, it was going to be tough. There is nothing you can do when you get debris on the ice.

“I’m gutted and so are all the girls. I came into this tournament saying I wanted no regrets and we gave everything we could in that game.

“I’m proud of the girls and we’ve still got a chance of a medal. I don’t want to come away without a meal around my neck.”

The bronze-medal game will begin at 8:30am GMT on Thursday, where Muirhead will look to secure Britain their first medal in curling since Rhona Martin’s ‘stone of destiny’, with the gold-medal game following at 1:30pm.

The men will contest their medal matches a day later at the same time, Britain going for their first curling gold since 1924 when they won by the staggering margin of 46-4, which was only officially recognised as an Olympic title in 2006.