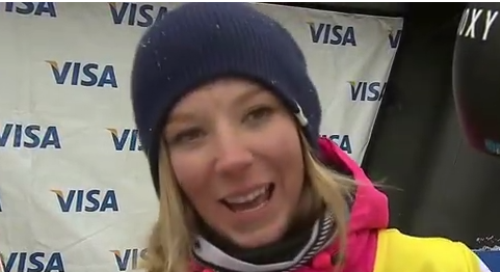 Dara Howell made history this morning by winning the first ever ladies ski slopestyle event at the Winter Olympics.

Howell only took up the sport three-and-a-half years ago after previously competing as a figure skater and she was thrilled with her performance.

We are a very small community, and there are over 300 people at the ski hill awake at one o’clock in the morning to watch her

“Oh, my God ! I don’t know what to say. I can’t believe it. It is so surreal and I am so happy to win a gold medal for Canada,” she said.

“I don’t think it will hit me until later. It is truly amazing. There are a number of really good girls out there and I came out on top.

“This is the best moment in my entire life.”

The Canadian who had to have stitches when a lampshade fell on her face in her room and couldn’t believe that her performance has earned her a place in the record books.

“That really hasn’t hit me yet. That will go down in history,” she continued.

“I am so proud. It’s huge for Canada. I’m happy to bring home another gold medal for Canada. The hard work has paid off.”

Dara’s grandmother, Jacquie, was watching on at the Rosa Khutor Extreme Park and was ecstatic, shedding tears of joy.

“To see her win the gold is so special,” she smiled.

“We are a very small community, and there are over 300 people at the ski hill awake at one o’clock in the morning to watch her,” she continued.

But Jacquie was sure that nothing was going to change when the Olympics are over, saying: “She’s still just our little Dara at home.”

A third Canadian competing in the event, 20-year-old Yuki Tsubota, fell heavily and was carried from the course on a stretcher.

Officials confirmed that Tsubota suffered a jaw injury and had been taken for further assessment.