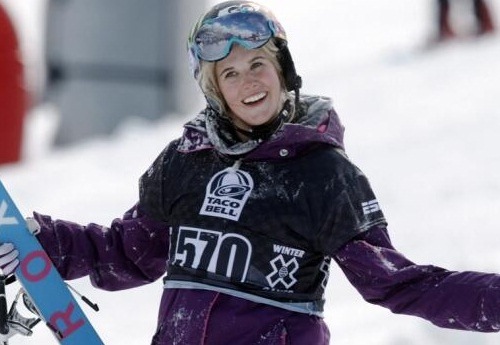 Canada were the dominant force in the freestyle programme at Sochi as they topped the medals table with four golds, four silvers and a bronze.

One-two podium finishes in the ladies ski cross and both of the moguls saw them better the United States’ record of eight freestyle skiing medals in a single Winter Olympics.

It is a glorious high for a nation which suffered terrible tragedy only two years ago when freestyle skiers Sarah Burke and Nik Zoricic died tragically within two months of one another, both at the age of just 29.

Sarah Burke is watching over us tonight, and we just want to pay our respects to her as much as we can

The Canadian team came to Russia determined to triumph in memory for Burke and Zoricic and succeeded in glorious fashion.

Burke’s tireless efforts in getting the half pipe event added to the Olympic programme was appreciated by athletes participating from all nations in a fitting tribute.

Dara Howell, the gold medallist in the inaugural slopestyle skiing event, dedicated her medal to her inspiration Burke.

“This medal is definitely for Sarah. She made the sport what it is today.”

“She always wanted to see the progression in the women’s format,” Howell added. “To see the girls throwing what the guys were throwing , I feel that’s what I did and I took the gold.”

On the night where her sport made its Olympic debut, competitors united in memory of Burke, forming a heart in thanks to her efforts allowing them the opportunity to show off their talents on the biggest stage. Even the often tense American-Canadian rivalry was parked to appreciate a fallen icon.

“Sarah Burke is watching over us tonight, and we just want to pay our respects to her as much as we can,” said Maddie Bowman, who took the gold for America in the inaugural woman’s event.

Elsewhere, Belarus were the surprise package of the freestyle as they pulled off an impressive double in the aerials as Anton Kushnir and Alla Tsuper took golds to upset favourites China in the men and women’s respectively.

The Chinese have dominated the format in recent years, boasting world champion Xu Mengtao in their ranks and predicted by many to sweep the podium in the men’s event.

Mengtao had to settle for silver behind Tsuper while Jia Zongyang took a solitary bronze in the men’s as China failed to secure their first aerial gold since Han Xiaopeng in Turin 2006.

Despite a number of injuries leading to questions over safety at Rosa Khutor Extreme Park, the debuting slopestyle and halfpipe events proved thoroughly entertaining additions to the Winter Olympic Calendar.

There were two superb clean sweeps in the men’s ski slopestyle and ski cross. Team USA dominated the entertaining slopestyle which was an early highlight of these Games, with Joss Christensen, Gus Kenworthy and Nicholas Goepper picking up the medals.

France’s men then emulated that in the ski cross final as world champion Jean-Frederic Chapuis finished ahead of Arnaud Bovolenta and Jonathan Midol.

The quarter-final stage produced a memorable, if not comical, photo finish as Egor Korotkov led a trio of sliding fallers in a struggle for qualification.

After a successful and entertaining programme at Sochi, the World Cup schedule gets back underway in March for freestyle skiing in Inawashiro, Japan.

Sochi 2014: Equality at the Olympics jumps forward in Russia