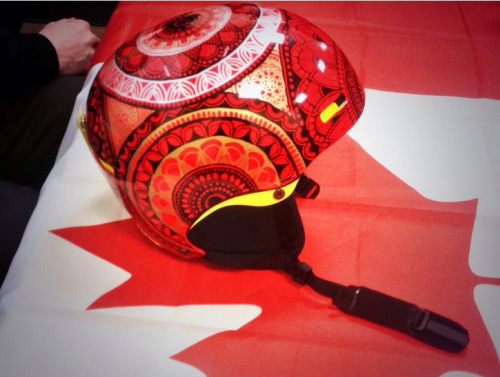 When charitable alpine skier Brad Spence takes to the men’s slalom track on Saturday, the world will see his helmet adorn the design of a cancer patient.

Canadian Spence met 17-year-old Gillian O’Blenes, who suffers from bone cancer, during a hospital visit in Calgary 18 months ago.

After a word from her mother about the girl’s talent and a look at her sketches, Spence decided that he had to include the inspiration and talent of O’Blenes to his Sochi preparations.

My setbacks have been so small in comparison. Day in, day out, she has a smile on her face and I know she’ll be back on stage one day and seeing her dance will be amazing

“I asked to look at her sketch book and saw incredible and ornate patterns on the paper and at that moment I decided I wanted her to be part of my Olympic journey,” he said.

He visited her again, handed her a plain, red helmet and told her: “Here’s a blank canvas – put your mark on it.”

Spence having had a career blighted by injury – he has missed four seasons following a training crash and knee cartilage surgery – recognised the sheer talent of the former dancer and was sympathetic of the adversity she faced.

When he saw the finished product, which incorporated the gold, silver and bronze of the Olympic podiums, he was stunned.

“When she gave it back to me, I was speechless,” he said.

“It is beautiful and has a powerful meaning. Knowing what she has been through puts everything in perspective.

“My setbacks have been so small in comparison. Day in, day out, she has a smile on her face and I know she’ll be back on stage one day and seeing her dance will be amazing.

“Gillian’s a fighter and when I wear the helmet on the 22nd she’ll be out there with me.”

O’Blenes, speaking from her hospital bed, is overjoyed not just because her art-work will be on display at the Olympics, but also from the support she has received from the athlete.

“It’s going to be unreal to see my work not only on an Olympic athlete, but someone who has become a really good friend,” she said.

“Brad is really inspiring to me and knowing about his recovery from setbacks makes me believe that I can recover too,” she added.

It’s not the first time that Spence’s charitable nature has affected his choice of ski attire.

In 2012 a nine-year-old Asberger’s sufferer had saved C$150 after hearing that the alpine skier required sponsorship.

Spence rewarded the young boy’s charity by painting his name across his helmet for a World Cup event.