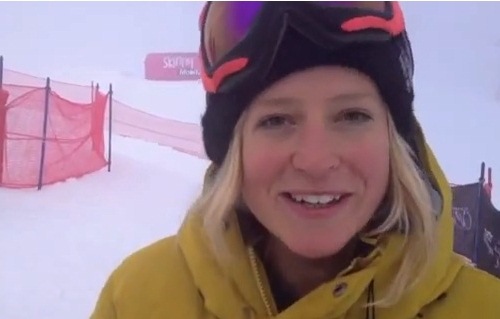 Jones led after the second run of the competition but American Jamie Anderson took gold ahead of Enni Rukajarvi of Finland.

But the three-times X Games slopestyle gold medallist was delighted that she was able to secure a place on the podium.

“I knew I was going to drop [down from first] but I didn’t know how far. I am just so happy.

“I did the best run I could have done.”

The 33-year-old had to watch ten athletes attempt to beat her score of 87.25 and was surprised at the finish line by her parents.

“It was so difficult waiting. I thought I did my best run and landed it as best as I could, thankfully it was enough,” she added.

“That was a long waiting game. It feels just ridiculous right now and I can’t actually believe it.”

The Bristolian, who has worked as a chalet maid and in a cardboard factory in the past, was considering if she had a future in the sport in when it was added to the Olympic programme in 2012.

“I feel very proud to have won a bronze medal for my country, I can’t believe it’s our first on snow,” she continued.

“I never thought this would be a possibility because it was only three years ago that slopestyle was added to the Olympics and I’d never competed for my country.”

Liz Nicholl, UK Sport Chief Executive, said that he medal will help create momentum for Team GB as they bid to make this their best Winter Olympics since 1924.

“It’s wonderful to see all the hard work and dedication of Jenny, her coach and support staff, realised when it mattered the most,” she said.

“Jenny Jones winning a historic first British Olympic medal on snow, in the new slopestyle snowboarding discipline, will create a huge sense of excitement and momentum within the team.”