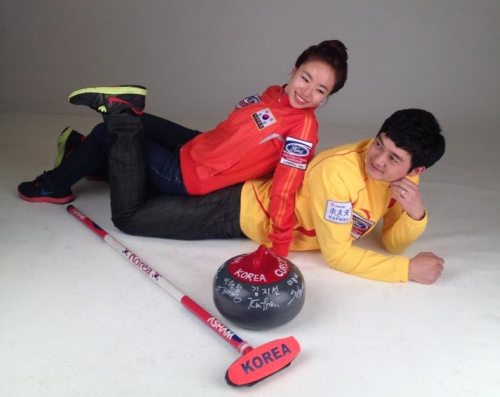 While men worldwide will be traipsing the aisles to avoid any awkward Valentine’s Day moments, spare a thought for one Winter Olympics couple.

Chinese curler Xu Xiaoming may need more than a last minute dash around the shops to impress his wife as he put his foot in it before the big day.

His Korean wife Kim Ji-Sun faces up to her husband’s nation on Valentine’s Day, which falls this Friday, and it has completely split his loyalties.

This is very difficult, but it is significant for both of us as athletes

Surprisingly, however, he has declared his desire for his nation’s team to win, rather than to see his wife succeed.

“Through curling we have a lot of interaction with the Chinese female team, so I would be very happy if they won,” he said.

“I think the Chinese team is very strong, and they have a good chance,” he said as he revealed they had refused to practise together or discuss strategies in the build-up to Sochi.

The ruthless couple met through curling in 2007, and married last May, and have since learned to completely separate their personal and competitive lives.

Kim, on the other-hand, has no such difficult loyalties to contend with, as the men’s Korean team did not make it through to the games.

“At a personal level this is very difficult, but it is significant for both of us as athletes,” she said.

“Of course I would cheer for the Korean team, because those are my countrymen.

“But I would at the same time be cheering for China because that is my husband. In the end, I would hope for my husband that he would win.”