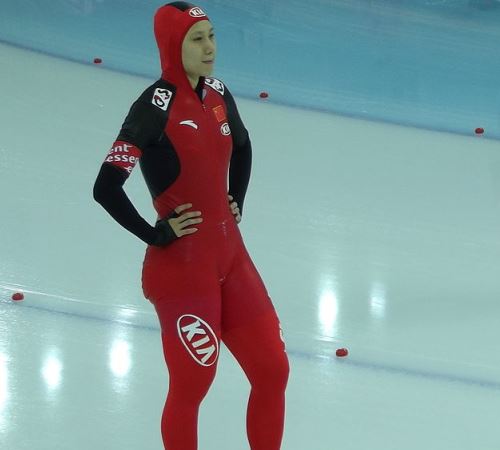 China’s Zhang Hong caused one of the upset of the games by winning the women’s 1000m speed skating final and leaving all the favourites in her wake.

The 25-year-old Zhang’s victory, in a track record time of 1:14.02, gave China their first ever speed skating gold medal.

Zhang, who made no significant impact on the Word Cup circuit this season finishing no higher than sixth, came in ahead of Dutch duo Ireen Wust and Margot Boer.

I’m competing with myself. I was very nervous as I was waiting and I don’t think anybody could have understood how I felt waiting

This reflected in her early run in the final starting before the ice preparation break – rarely a run that results in a medal.

“I am not surprised, I’m so happy, I thought about medals but not a gold. The important thing was to trust myself,” Zhang said.

“I didn’t care what time I went on ice. I’m competing with myself. I was very nervous as I was waiting and I don’t think anybody could have understood how I felt waiting.”

The American duo of Heather Richardson and Brittany Bowe, who were heavy favourites, had to settle for seventh and eighth respectively.

Ian Wright: What I think of Gabriel Martinelli at Arsenal